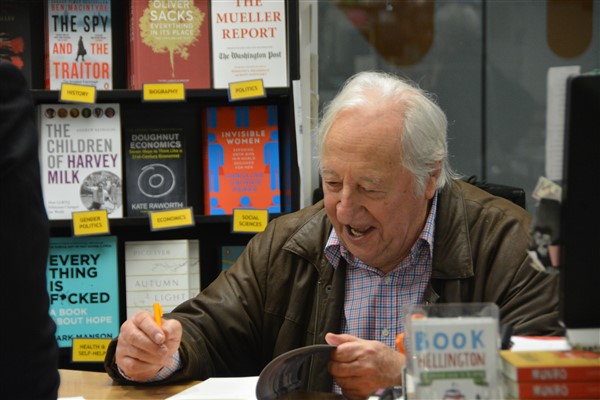 On Thursday June 6th the winds behaved themselves so Peter Bland, beloved poet and actor, could grace our cozy shop along with friends, family and booklovers alike, for the launch of his new poetry collection, Just Looking. The Cuba Press’s Mary McCallum opened the evening with some jovial ribbing and many thanks, which carried through the night. Greg O’Brien delivered an exceptionally clever and gracious speech that perfectly captures the humor and warmth of Peter and his work. Greg very generously has allowed us to publish that speech below. After all the laughs and applause (even a hearty rendition of Happy Birthday, as Peter recently celebrated his 85th!) the evening concluded with Peter signing copies of Just Looking. 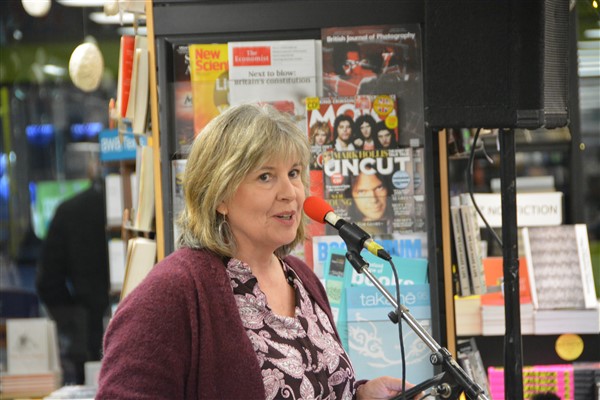 Mary McCallum from The Cuba Press 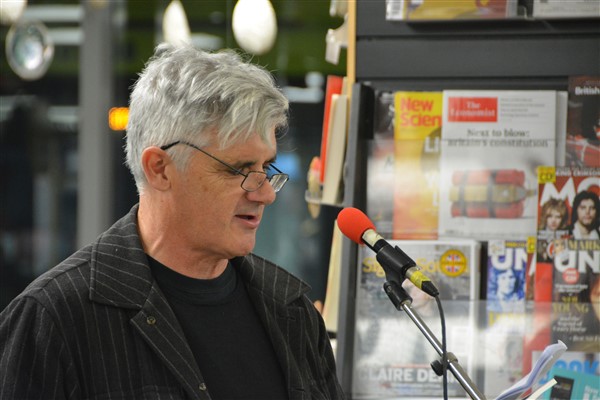 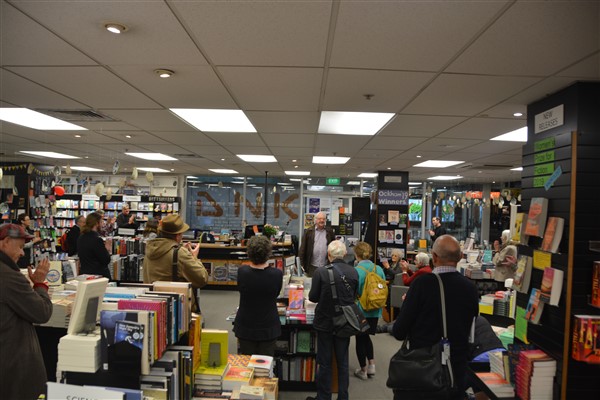 Peter Bland receiving one of many rounds of applause 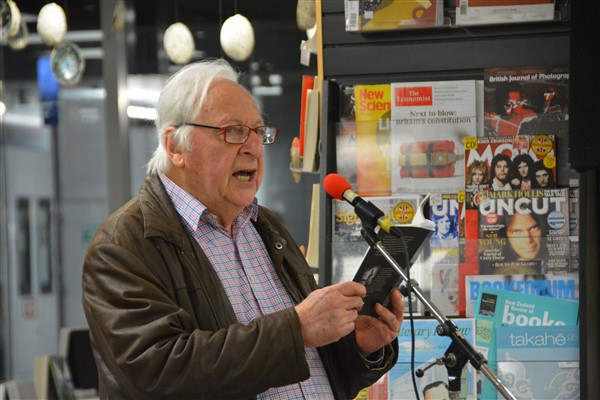 Peter reading “What Happened to Tonto” from his new poetry collection 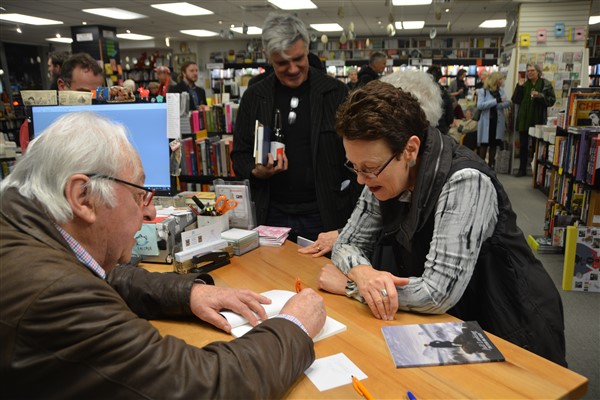 In an earlier book Peter Bland recalled his arrival here in the Capital, an emigrant from England in 1954: ‘I thought I was coming to a land of plenty, with palm trees and hula girls,’ he wrote, ‘but Wellington felt mildly Stalinist when I got here.’

With that in mind, it is appropriate that we are launching Peter’s newest book here in Wellington, in the Moscow of the South Seas. And I feel confident the Politburo is well represented in the audience tonight. As you know, this launching was supposed to happen last Thursday … but the city and its weather, I figure, wanted some retribution from Peter vis-à-vis his youthful remark … Last week the climatic conditions were nothing if not Soviet and more than a little Stalinist. Peter was sent home. Tonight, weather-wise, is a great improvement. And here he is.

Stalinist is a word you wouldn’t tend to use in proximity to Peter Bland’s poetry. He is probably the least Stalinist poet I know—even if the very Northern European figure on the cover of his new book, staring out to sea, does have about him a whiff of authoritarianism. Peter Bland is a poet of human warmth rather than coldness, of function rather than disfunction, of living life generously and to the full rather than holding back …

Early in his career, despite his initial reservations, he established himself as one of the great poets of the Wellington region. Far from being the gulag he feared, the place turned out to be conducive to study, employment, thespian trailblazing, the writing of poetry and living life generally. If you’re interested in the poetic pre-history of the new book, I would recommend, in particular, the first fifty pages of Peter’s Collected Poems. His opening gambit as a published poet was a lively, socially astute, incisive yet wide-ranging, ironic yet never caustic, mostly affectionate and always brilliant paean to Wellington, the Hutt Valley and Kapiti Coast.

From there and then, the poetry followed him back to Britain in the late 1960s, before heading back to New Zealand again—Auckland this time—then back to England, then back to Auckland again. As a result of all this relocation, or oscillation, an artistic personality evolved that was equally at home on both sides of the globe, yet which was also in a permanent state of displacement and exile.  A good, paradoxical situation for a poet to find himself in.

This new collection of a different kind of book to Peter’s Collected Poems, although it commandeers a good few poems from there, and to some extent reinvents them without changing a word. While the Collected tracked and traced Peter’s life, with digressions and diversions, Just Looking is shaped like a gallery full of paintings. Here Peter has adjusted his editorial /authorial position and donned the guise of an art curator, trawling through a life’s writing for painterly moments. For some years I worked across the road from here as a curator at City Gallery Wellington. As a result, I think I have a reasonable idea of what it is that curators do: They select certain works and place them on walls or in a space so that special relationships between them emerge. The idea is that the works will be affected by each other. In a good hang, conversations start up between the works; their content is altered by the company they keep.

And so it is that, in Just Looking, Peter’s most painterly poems shine new light on each other and on themselves. Some of the poems are well-known—much-anthologised pieces such as ‘The Happy Army’, ‘The Man with the Carpet Bag’, ‘Gauguin in Auckland, 1895’. Yet, in the present context, we find that the poet-curator has rehung them so that something new and unprecedented emerges.

As well as being curator in the present instance, I think of Peter as a choreographer too. The book has a wonderful ebb and flow, a good dose of what Nietzsche called ‘the divine skip and jump’. I think of the poet/author in this case shifting his weight from one leg to the other—exactly like the figure on the book’s cover. One leg stands on Art, the other on Life. Side to side he goes. And so we, the readers, go too.

Peter’s book belongs in that wondrous body of poetry that is at once at ease in the world of painting yet greatly affected and even rattled by it—I’m thinking of books like Paul Durcan’s Crazy About Woman, Rafael Alberti’s On Painting or Derek Walcott’s Tiepolo’s Hound. And I’m also thinking of such painting-inspired poems as W. H. Auden’s Musée des Beaux Arts, Wallace Stevens’ Blue Guitar and Hone Tuwhare’s raucous hymn to the abstractions of Ralph Hotere, Hotere.

There is a clearly a lot more to Just Looking than simply looking. Although Caspar David Friedrich’s seaward-facing figure on the book’s cover makes sure we know that looking is a big part of why we’re here.  On the back of the book, we have a photo of Peter, also standing in front of the sea. It is as if the Friedrich figure up front has spun around 180 degrees. He is now looking straight back at us. In contrast with the existential aloneness of the front cover, the figure on the back is drawing us warmly into an encounter, a conversation even..

I think of the two cover-figures as part of a three-way conversation also involving a poem in the book, ‘A photo of the artist as a young man’ concludes:

It’s a pose for posterity, as if the future

will sort everything out

and I’m bound to come good.

But the background’s terrific,

looking as if, in the very

next minute, it will roar

ashore and swallow me up.

The back-cover photograph also reminds us that, despite appearances to the contrary up front, like all Peter’s books, this is a self-portrait. There is always room in his verse for the person and the heartfelt.

We are the art that we look at. In Peter’s poetry, I see the tenderness of Bonnard’s painting—and also a sense of the French painter’s husbandly devotion (in the best, co-equal sense). I detect the vivid palette of Gauguin; the orchestrations of Lorraine; the rough-spun, madcap, wistful genius of Patrick Hayman; the real-life theatre of Edward Hopper; the understatement of Vermeer, and the carnivalesque romance of Marc Chagall. Alongside the oil on canvas, we encounter other kinds of images: family photographs, comic-books and films; a child’s drawing and a mural are also very much a part of this exhibition. There is an over-riding sense that popular culture is something inhabited rather than received—another of the world’s great imaginative gifts.

Earlier, I dug out some notes from a Radio New Zealand session with Kim Hill a few years back when we discussed Peter’s poetry. I said, on that occasion, he was probably the most ‘likeable’ poet in New Zealand poetry. (This is a great virtue, I hasten to add.) And I’ll hold with that. Peter is great company. He is wry but gentle, learned but never a show-off. You like having him in the room with you.  And tonight we do in fact have him in the room.

The book and the man, both well and truly launched, we now officially take back into the warm embrace of the reformed Stalinist enclave of Wellington Central. On behalf of all your friends in the literary politburo, welcome back. But, of course, Peter, you never really left. Your poems, for some sixty years now, have been very much a part of this place—just as they have been lodged in the hearts and minds of your many readers in this city and in the wide world beyond.

Just Looking by Peter Bland is available in store and from our online shop.

Words and Pictures by Dani Henke