AFTERGLOW: The Stories of Bill Manhire 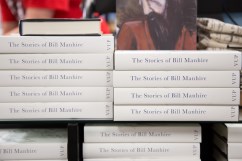 Bill Manhire’s name is deeply tied to creative writing in New Zealand – national treasure status, make no mistake about it. So it was with great pleasure that we hosted the launch of The Stories of Bill Manhire on Thursday the 12th of November 2015. While Bill may be predominantly known for his poetry, his short stories are brilliant in their own right – and this collection is a beautiful representation of Bill with his best prose pen in hand. 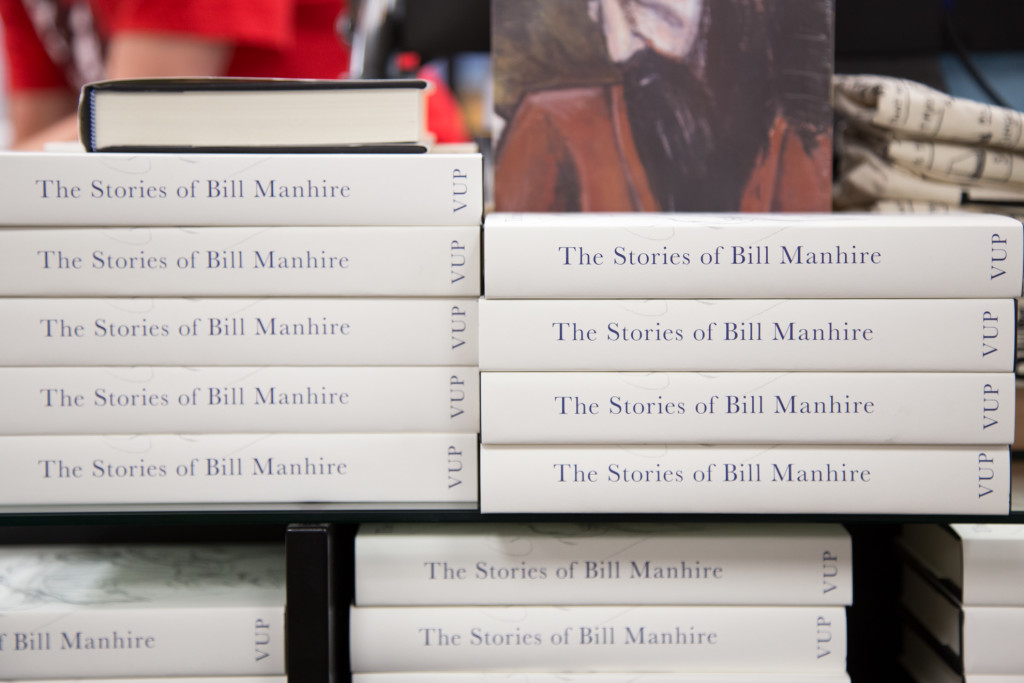 The Stories of Bill Manhire

It was a regular rollcall of Wellington literary stalwarts – both in the crowd and on the list of speeches. Fergus Barrowman of Victoria University Press spoke first, commenting on the ‘big and warm crowd’ before telling the crowd ‘I am exceedingly happy to see in the world an idea that’s been around for a little while now.’ 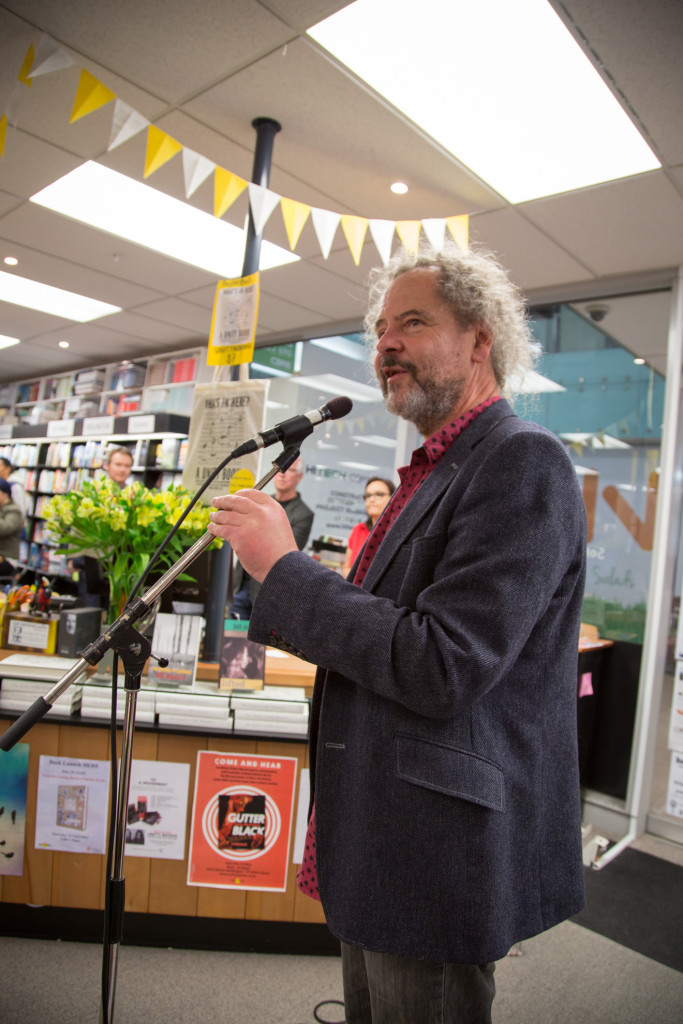 He spoke about Bill’s integral role in the early career of so many of New Zealand’s writers through his establishment of the International Institute of Modern Letters at Victoria University. ‘He created a lot of space for young writers to come through.’

With regard to the book itself, he described the cover illustration (‘the beautiful baby by the late Peter Campbell’) as ‘perfectly summing up the promise of this book.’ 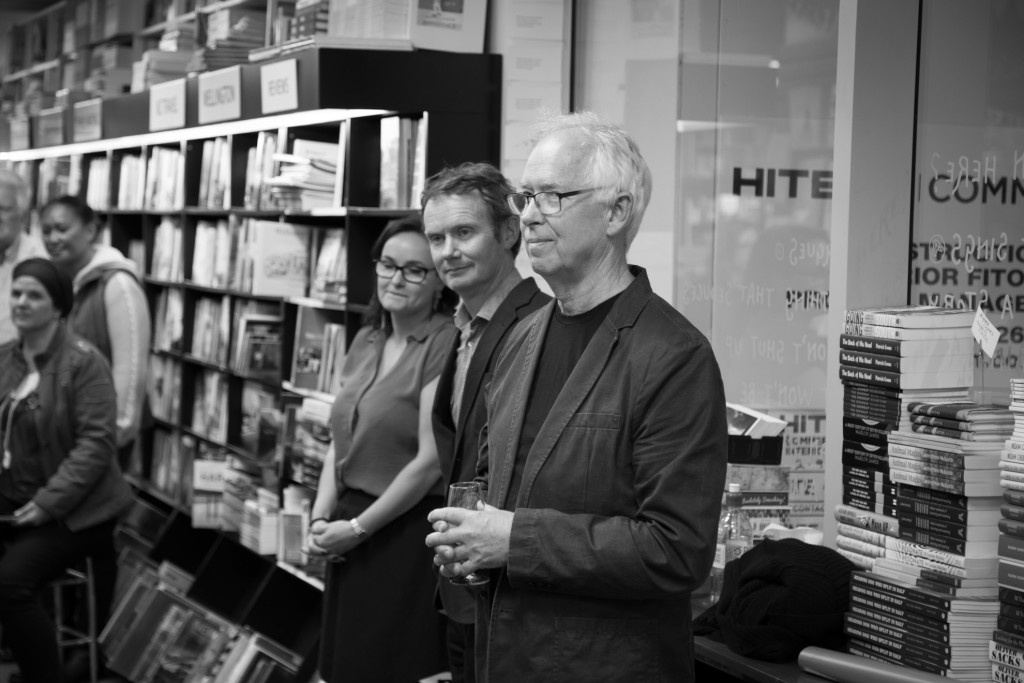 The calm before the speeches: Vanessa Williams of Unity, Damien Wilkins, and Bill Manhire.

Damien Wilkins, novelist and current director of the IIML, took up the official launching mantle, and got started with a couple of tales of writerly encounters past that had the audience laughing.

‘I didn’t realise how thoroughly I’d internalized these stories,’ Damien said. ‘These stories were my education when they first appeared … [they] remain fresh acts of rebellion.’ 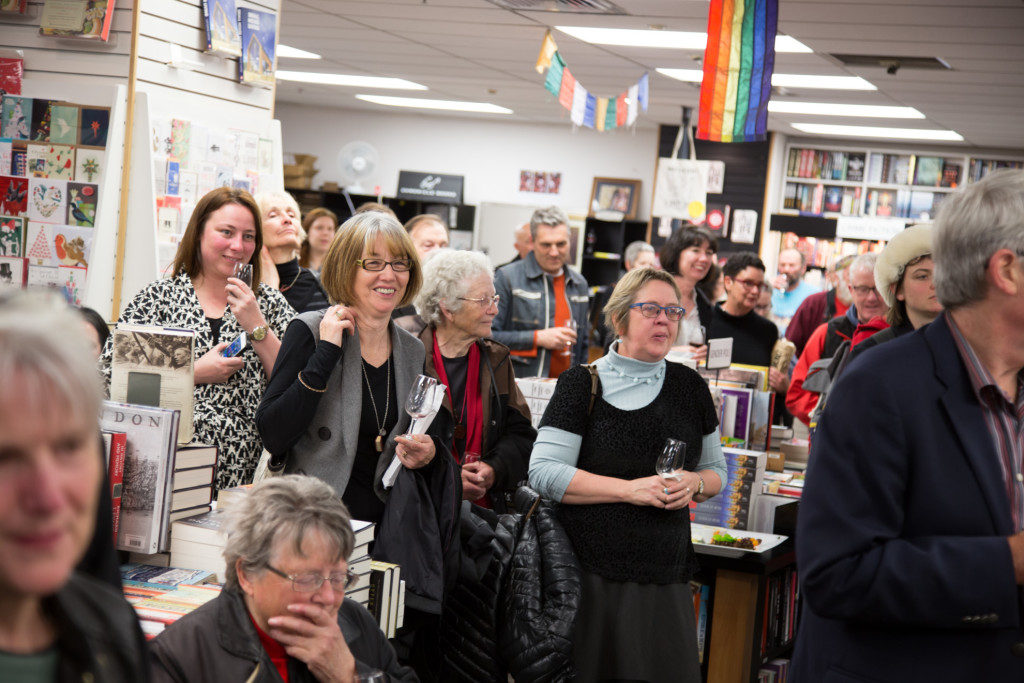 Fans, friends and family look on.

On the occasionally questionable portrayal of poets in Bill’s fiction, Damien observed: ‘he relishes the opportunity to castigate in fiction … fiction allows him to be off-duty’. The stories are ‘ferocious in their hidden centres. There is a furious melancholy, and sometimes just fury.’

After the effusive speeches from Fergus and Damien, Bill had his turn in front of the audience. He first commented on the pleasant symmetry of the night’s event, with Bill having launched Damien’s first book in 1990 at Unity, back in the Perrett’s Corner days. 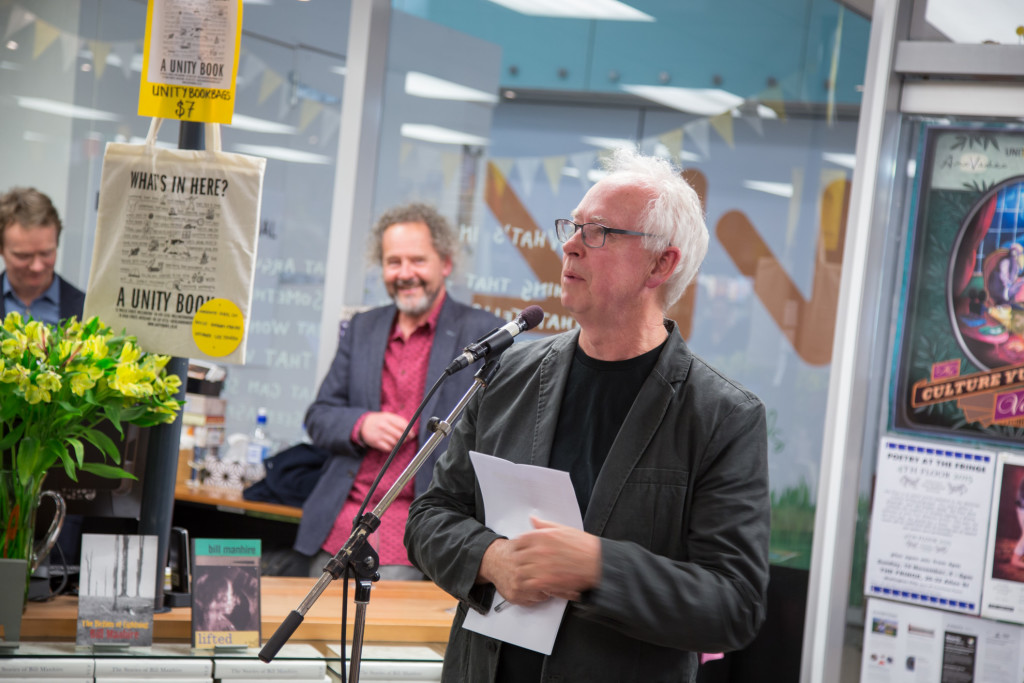 Bill speaks to the audience.

He referred to the in-store display of the book, taking pride of place on a column and surrounded by baby photos of Unity staff, in homage to the book’s cover: ‘I’d like to thank Peter Campbell, but that’s not quite possible.’ He thanked Greg O’Brien for his illustrations inside the book, and then told the crowd ‘most of all I need to thank Fergus’. He described Fergus’ unyielding dedication to the book even in the face of Bill’s self-described grumpiness. The Stories of Bill Manhire surrounded by Unity babies.

He prefaced his reading from the book by saying ‘The traditional thing for me at this point is to read a poem, so I’ll read some prose.’ The audience was hanging on every word, and with a bit of a spell still hanging over everyone, copies of the book were promptly snapped up and then inscribed by Bill, to mark a momentous evening for an equally momentous book. 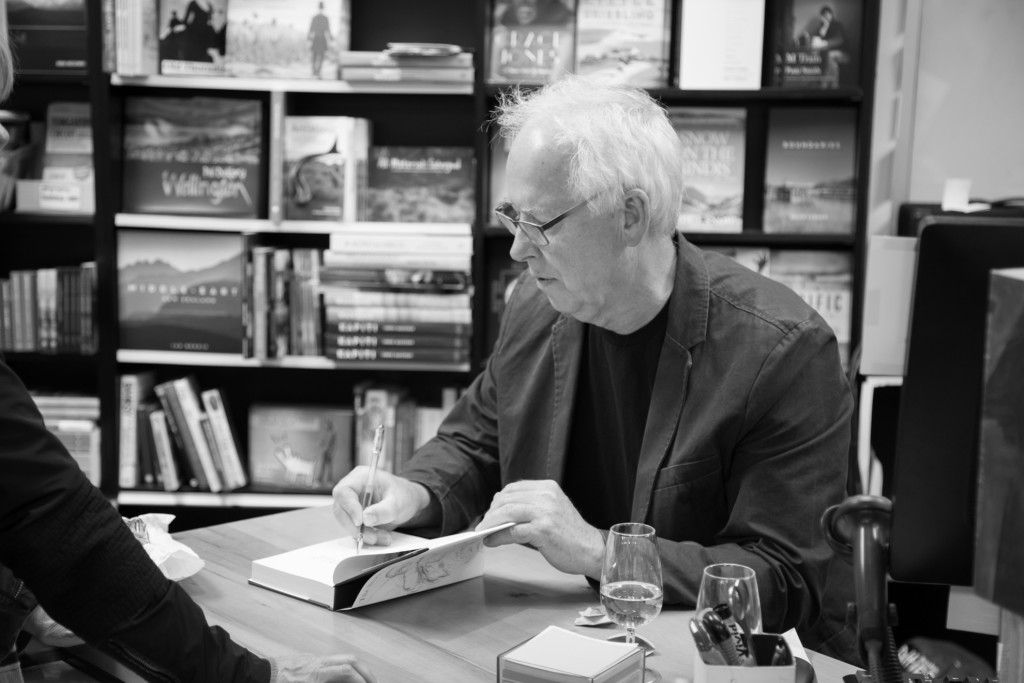 Bill signs copies of his book after the speeches.

The Stories of Bill Manhire (Victoria University Press) is available in store and from our online shop here.