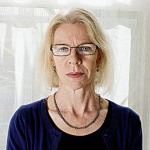 The award was founded by Unity Books Auckland owner Jo McColl, and Susanna Andrew to commemorate Nigel’s love of writing and reading. From his time as a bookseller, Nigel understood the sad reality that writers don’t always have the money to spend on books. The recipient receives a $1000 Unity Books voucher to spend as they wish.

Writers are readers before they are writers and Nigel adored it when fellow writers came into the shop, loitered and mulled and browsed the shelves. Unity Books, he believed, was “a writers’ turangawaewae”.

Anne Kennedy has recently published the novel The Last Days of the National Costume and the poetry collection The Darling North. She is a writer who has consistently surprised her readers with an utterly unique way of viewing the world.

Previous winners of the award have been writers Geoff Cochrane and Bill Manhire.

Susanna Andrew said, “A $1000 book voucher buys a lot of browsing time… Research has shown that more thought goes into spending vouchers than spending cash so I hope Anne will do a lot of standing around in the bookshop and take all the time she needs. This voucher has no expiry date… As an early fan of Anne’s writing, I know Nigel would be immensely proud to be championing her work today. He thought she was immensely talented and I have a clear memory of the way he loved slyly peddling her book 100 Traditional Smiles (now sadly out of print) as though it were a secret society he was letting you in on.”

Kiran Dass has been a bookseller at Unity Books (now in Auckland but previously in Wellington) since 2005. Kiran is an Auckland based writer and reviewer who has written about music, film and books for the NZ Listener, The Wire, Sunday Star-Times, Metro, Landfall, Real Groove, Rip it Up, NZ Musician, NZ Herald, Dominion Post, No, Pavement and Staple. She sometimes produces music features for Radio New Zealand and reviews books on RNZ's Nine to Noon show and reviews music books fortnightly for the 95bFM Breakfast slot Loose Reads.

View all articles by Kiran Dass