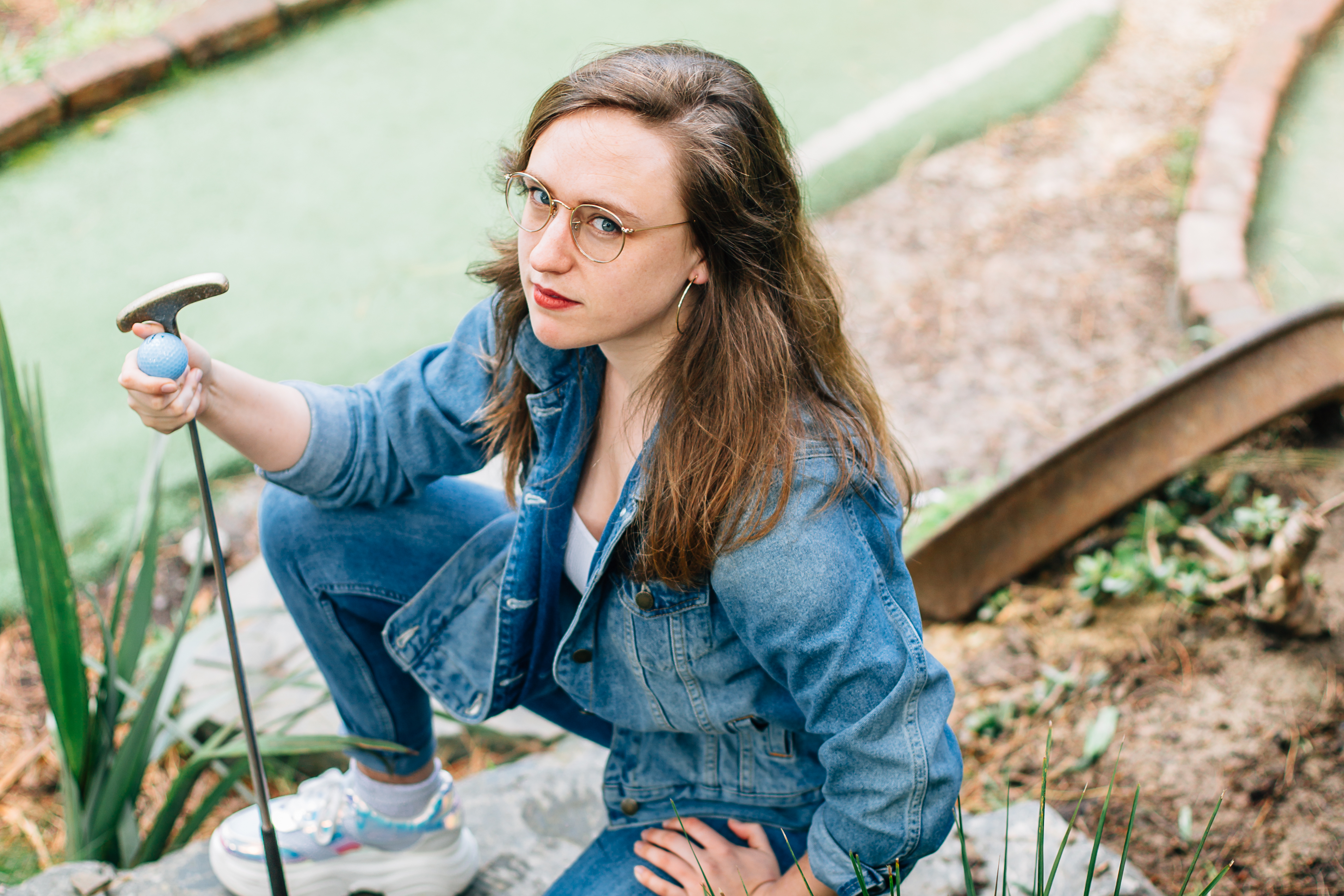 “The first time I read Freya’s work I thought . . . uh oh. And then I thought, you have got to be kidding me. And then I thought, God fucking dammit. And then I walked around the house shaking my head thinking . . . OK – alright. And then – finally – I thought, well well well – like a smug policeman. Listen – she’s just the best. I’m going to say this so seriously. She is, unfortunately, the absolute best. Trying to write a clever blurb for her feels like an insult to how right and true and deadly this collection is. God, she’s just so good. She’s the best. She kills me always, every time, and forever.” —Hera Lindsay Bird

Freya Daly Sadgrove is a writer, performer and theatre maker from Pōneke. She has a Master of Arts from the International Institute of Modern Letters, and her work has appeared in various publications in Aotearoa, Australia and the US. Head Girl is her first book.

Um. Because I have to or I will die!!!!!!!!!!!!!! Because I have a terrible compulsion to tell the truth? Because… to prove I exist? Because I have to let out the noise somehow. Everyone must have the same answer to this. Oh, I read a thing that was like “writers write to live twice” and that’s kind of true, except writing means you can live way more times than just twice, because of the editing process.

I mostly write at home in Island Bay. In the morning I write at the table across from my goldfish, Penny. It’s important to keep her company because she lives alone in her mansion. In the afternoon I usually have a nap on the couch and watch some shit on Netflix and then I work kneeling on the couch leaning over the coffee table. I don’t think it’s especially good for my back. Sometimes I go to Eamonn’s or he comes to mine and we write together. I, um, don’t have a job.

I’m reading Archer’s Goon finally! That’s by my favourite writer of all time, Diana Wynne Jones. I’ve read something like 30 of her books, but I’ve had real trouble getting hold of Archer’s Goon. Then at the VUP party Elizabeth Knox let me look at her massive collection of DWJ and borrow the ones I hadn’t read, which was super lovely, I’m really stoked about it.

Diana Wynne Jones is like………………. I don’t know. Her writing is so generous, it’s so much sustenance for me, it keeps me alive real good, like, it looks after me.

Jaclyn Moriarty, her characters are so effing lovable, they’re, you know, they’re my friends.

Tayi Tibble, you can tell she is absolutely herself when she writes, which is only ever a total delight to read.

Jonathan Stroud has written some of my full-on favourite stories, like, so epic and complex and fun and also sucker-punch tender.

Hera Lindsay Bird is just like, the wisest person I know, tells so much of the truth. Her writing helps me remember how to write and what kind of person I want to be.

Eamonn Marra lol I’m gonna be pissed if he doesn’t put me in his list. (I just read his answers and he DIDN’T, I can’t believe it). But for real his writing is in my soul. He said everything is sad and funny and nothing is anything else, and that’s the truest.

Ursula Robinson-Shaw and I know each other’s writing very… intimately, teehee. As in, I’ve seen lots of her writing at lots of stages of completion and for lots of years. And at all stages and for all the years I’ve known her it’s like……… her voice is so effing visceral and beautiful but so terrifying, like…. she cracks language like a whip, it’s so exciting to me.

My bedside table has like 3 empty beer bottles, four empty “chocolate dairy snack” pottles and several empty glasses. But in my backpack I have Archer’s Goon, on my desk I have We Have Always Lived in the Castle, and somewhere else in my room I have Dogsbody and The Tough Guide to Fantasyland. That’s my “to read” pile.

Well, Matilda is perfect, for which reason I have watched it one million times. I also really loved The Little Prince film that was done in 2015. I love adaptation that is translation rather than like… transplantation. The Little Prince is a wonderful example of an adaptation that lovingly translates a story from the language of book to the language of film. “Accurate” translation between different languages is impossible, so for every beautiful thing about the book that is impossible to capture in film, you have to compensate with an equally beautiful thing that is possible only in film. I also once saw a clip from a live action Little Prince film with Gene Wilder as the fox, which I was very tickled by.

Howl’s Moving Castle. I re-read everything but my second most re-read thing I’ve only re-read half as many times as HMC. I’ve read it maybe 15 times. It’s like going home. I have the whole geography of it laid out in my head in excellent detail, which formed over the first few reads, years and years ago when my imagination was more legit, so it’s a pleasure for my shit adult brain to go visit.

I reckon I’ll get roasted for this but it’s probably Winnie-the-Pooh. I founded my whole set of values on those books. Ugh, there’s this thing that goes around on the internet every Mental Health Awareness Week, which is this atrociously bastardised story about Pooh and Piglet going to visit Eeyore, and people think it’s what A. A. Milne actually wrote. Every time I see it I scream. Winnie-the-Pooh isn’t as cutesy and twee as people remember it (or as Disney did it) – it’s sweet, for sure, but it’s also smart and funny as hell.

Haha, like every book for adults that everyone loves? But also actually I need to read more Ursula Le Guin, I only just read The Earthsea Quartet and I loved it. I’ll go Left Hand of Darkness next.

I would have friends over cos it’s too high stakes to invite strangers over for dinner and have to make first impressions. I’d spend too much energy worrying if I’m doing enough to make them like me, and that would make me pathetic. So, Eamonn can come because I am totally at my ease with Eamonn. Hera can come because I miss her and I’ll take the opportunity to make her come to Wellington. Sam Duckor-Jones can come because he’s a delight and I think the four of us would make a very nice team.

Can’t cook for shit. We can have fish and chips.

Oh geez, I don’t know, I always insufferably quote This Be The Verse by Philip Larkin cos it’s true, and “Full Fathom Five” from The Tempest cos it’s pretty. But also “feckless spendthrift” and “be daffodils in June, you beastly things” from Howl’s Moving Castle. And also “you never can tell with bees” from Winnie-the-Pooh. Oh, and also I wrote this down when I finally read the Earthsea Quartet, it’s from The Farthest Shore: “When I was young I had to choose between the life of being and the life of doing. And I leapt at the latter like a trout to a fly. But each deed you do, each act, binds you to itself and to its consequences, and makes you act again and yet again. Then very seldom do you come upon a space, a time like this, between act and act, when you may stop and simply be. Or wonder who, after all, you are.”