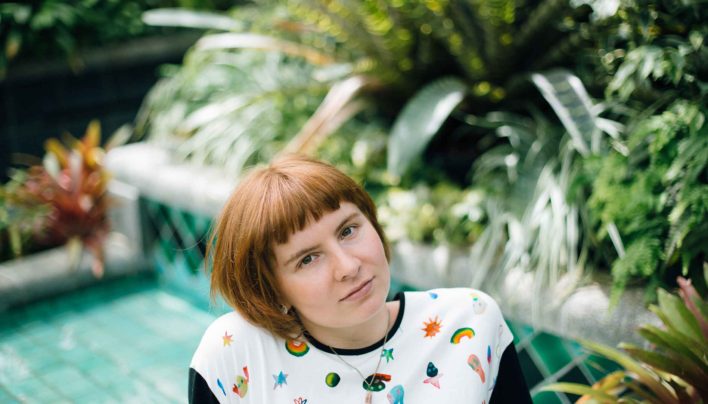 Madison Hamill has gone from re-reading the Harry Potter series to A Little Life, which made me wonder if there’s a fan fiction re-write of A Little Life with Harry replacing Jude. Madison also provides a great tip for covert book storage. Join us to celebrate the launch of Madison’s debut essay collection, Specimen, along with Oscar Upperton’s debut poetry collection, New Transgender Blockbusters, (VUP). 6-7:30pm Tuesday 3rd March. All welcome.

A father rollerblading to church in his ministerial robes, a university student in a leotard sprinting through fog, a trespass notice from Pak’nSave, a beautiful unborn goat in a jar . . .

In scenarios ranging from the mundane to the surreal, Madison Hamill looks back at her younger selves with a sharp eye. Was she good or evil? Ignorant or enlightened? What parts of herself did she give up in order to forge ahead in school, church, work, and relationships, with a self that made sense to others?

With wit and intelligence, these shape-shifting essays probe the ways in which a person’s inner and outer worlds intersect and submit to one another. It is a brilliantly discomforting, vivid and funny collection in which peace is found in the weirdest moments.

‘I never felt that I was looking at fine writing – only at astonishing writing.’ —Elizabeth Knox.

MADISON HAMILL is based in Wellington. She has an MA in Creative Writing from the International Institute of Modern Letters. Her work has appeared in The Spinoff, Sweet Mammalian, Turbine | Kapohau and Pantograph Punch.

Because I’m not good at talking.

I write in my bed mostly, or sometimes on the floor or while pacing around my living room. I can’t seem to write in a desk situation—I find it uncomfortable. The bed works because you don’t get back problems if you’re lying flat, and because I get tired a lot. I find that writing is tiring, or maybe this depends a little on the subject matter. Trying to recreate my childhood is something I find extra tiring. My theory is I can write for longer if the only energy I’m exerting is going directly to my hands and brain and not to any other part of my body.

I’m currently reading Three Women by Lisa Taddeo. My aunt and uncle give our family a stack of books each year for Christmas and this was one of them. I’m really enjoying it.

I don’t have favourites really, but here are my current obsessions (books rather than writers):

Ocean Vuong—On Earth We’re Briefly Gorgeous is a gorgeous book about love, OxyContin and the effects of the Vietnam war on an immigrant family in the States. It’s written as a letter to the narrator’s mother, a manicurist who can’t read. I love it because Vuong uses imagery in a way that feels surprising but rings very true. He asks, ‘Why can’t the language of creativity be the language of regeneration?’ and that feels important to me; the way he uses description restores beauty and dignity to experiences that have been diminished by the stereotyped, dominant (wealthy, white) narrative about them.

Hanya Yanagihara—A Little Life is a book I have started re-reading lately, because Yanagihara makes you fall in love with these characters even while gradually revealing an endless stream of traumatic events from the protagonist’s abusive childhood—their impact seeming to grow with time rather than diminishing—until you want to never stop crying, but the smallest of happy moments bring immense joy. It’s horrible but weirdly life-affirming and unputdownable, and one of the things I really like about it is the way it celebrates the joys and complexities of adulthood where many other books wax nostalgic about childhood.

FYI both of those books are a bit traumatic, and, especially the latter, should come with a trigger warning, sorry. I do also like books that aren’t about trauma.

I don’t have a bedside table, because I’m currently on the move, but if I did I’d put the next books on my to-read list, which are Frankissstein by Jeanette Winterson, and The Lonely City by Olivia Laing.

Pride and Prejudice (2005). I know how basic this choice makes me, but this movie is like comfort food to me. The other version is more historically accurate, but this one is more wistful and melodramatic. I like to watch it and imagine that I have nothing to do all day except read and play the piano and say witty things at balls, and that I live on a cute farm with horses and only have one life-decision to make.

Harry Potter and the Prisoner of Azkaban (book 3), because I used to reread the series annually over summer when I was growing up, but as time went on, I started skipping the first two books.

I really don’t have one. But there’s this character in Sally Rooney’s Conversations with Friends who thinks freakishly like me, or some version of me, and when I read it I felt very validated, like I must be a real legitimate human if Sally Rooney can so easily write my mental twin. So I guess I’m just self-obsessed.

I feel like the right answer is War and Peace, but I’m not going to read it, and I’m at peace with that now. I’ve decided to just read books I want to and not the ones I feel obligated to read out of fears that I’m not a good enough book-nerd.

This question has destroyed me. I’ve had it in my inbox for weeks and I still can’t answer it properly. First off, this dinner party thing doesn’t sound like something I would do, because a) I don’t have a kitchen, and b) conversing with strangers is stressful. I thought of inviting writers I knew, but then I panicked and started worrying about what other writers I knew would think about why I didn’t choose them. Did I value them less? Was I judging their writing or their personality? If I chose writers I didn’t know was it because I was judging their personality from their books, and if so, what would they think of me, if they had only read my book? Would they want to come to my dinner party? Then I thought, why is the question hypothetical? If I wanted to invite writers over to dinner, wouldn’t I just do that? Which barriers would the hypothetical nature of the question allow me to overcome? Does it mean I could invite writers who lived overseas, or who were so famous that they wouldn’t otherwise want to come over to my place for dinner, and if so, could I also invite writers who had died years ago and just hypothetically bring them back to life? If I think about this question any longer it will be to the detriment of my productivity and mental health so I’ve decided to decline to answer.

My books are currently stored in boxes at opposite ends of the city—hidden in a secret cupboard under the stairs of the Airbnb where I clean, and in my friend’s storage cupboard in her flat.

I don’t have one. I asked some friends and found out that some people do have favourite quotes. I like the idea of having a favourite quote that someone could put on a mug or something for my birthday, so I’ll keep an eye out in future.