Launch Update: The Lie That Settles by Peter Farrell 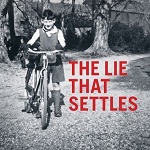 Thursday the 19th of September Unity Books Wellington was proud to host the launch of The Lie That Settles, the memoir of Peter Farrell.

Revellers packed the store early to celebrate the publication of a very interesting life. Peter’s learned knowledge of a lie at the centre of his family propelled him into a search for the truth and himself; spanning years, continents and a range of emotions.

The launch began with author Maggie Rainey-Smith welcoming everyone and introducing the book. Following her was writer/director Linda Niccol further celebrating Peter and his memoir. Dame Fiona Kidman then spoke, praising Peter on his honesty in telling his story. As a close friend she expressed admiration and rejoiced on the news that Unity had sold all the launch copies!

Peter’s reading was a real treat, injecting great comic timing into his experiences of immigrating from the UK to his new home of New Zealand. The launch was wrapped up with conversation and copies signed.

Eager readers get their copies signed before the launch

Peter reading an extract from his memoir, The Lie That Settles

Thanks to Peter Farrell, Dame Fiona Kidman, Linda Niccol, Maggie Rainey-Smith and everyone who came for supporting local NZ publishing.