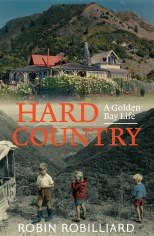 The crowd at the lunchtime event

The crowd listens to Robin read from Hard Country

Robin answering questions from the crowd

Rob arrived a half hour early, thumbing through the pages of Hard Country in the children’s section. Rob’s copy of Hard Country is jam-packed with post-it notes, paper clips, and slips of paper to mark different sections. The pages themselves are coloured with highlighted paragraphs, the margins filled with notes and pen marks.

After an introduction by Dylan, Rob starts by reading excerpts from the book. Rob weaves in stories, gossip and rumours as they come to mind, often making the crowd both cringe and laugh. Honesty comes easily to her, as she’s sharing her memories of her early years on the farm. She speaks of the hardships of living extremely isolated from friends and family on “land that gave nothing back”.

As if keeping a farm afloat wasn’t enough of a challenge for Robbie, she’s also a whistleblower, a mother to three children who all attended university, and a journalist. She started off interviewing the other farmers in the area, before going further afield to the North Island and eventually Australia. Robbie went on to do interviews all over the world, including North Korea.

Questions from the audience prompted another story, this time involving an argument with her husband, in front of the delivery man, about where they were going to fit the baby grand piano that had just been delivered. Rob had decided to start teaching music as a way to earn extra money on the farm.

Her stark honesty makes it easy to identify with her, and although she’s faced hardship that could make many people bitter and angry, Rob is both thrilled with the success of her book and determined to continue working hard. “I no longer envy those who had an easy life,” she says. It’s easy to see she doesn’t see herself slowing down anytime soon. I imagine “easy” would be quite a bore to Rob.

and from our ONLINE SHOP HERE

Update: The Chimes by Anna Smaill
Update: Some Here Among Us by Peter Walker