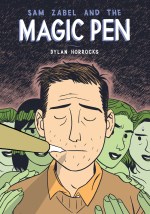 IN OTHER PEOPLE’S UTOPIAS

Dylan Horrocks has had an awfully busy year. His anthology Incomplete Works was released during the NZ Festival’s Writer’s Week in March, he had a short story included in Monstrous Affections (an international short story collection featuring the likes of Neil Gaiman, Paolo Bacigalupi and Holly Black) and most recently, his latest full-length graphic novel has hit shelves here and abroad. Sam Zabel & the Magic Pen was launched in Auckland in late November, but we here at Unity played host to a Wellington event to welcome it into our part of the country.

The atmosphere was charged as people arrived – December lunchtimes are always going to be rather on the hectic side, but having New Zealand’s most significant graphic novelist in for a signing and a chat certainly amped things up. After an introduction from Unity’s own Dylan (Sherwood), Elizabeth Knox gave a surprise introduction of her own, regaling the audience with the story of her and Dylan’s adventures on the French train network, travelling between literary festivals as two kiwi comrades. She passed over to the man of the hour by finishing up: ‘Here’s Dylan to explain to you his anxieties.’

The session went on as a combination tale and conversation, with Elizabeth prompting Dylan with questions every so often, to get some fascinating tidbits out of his time in store. Much was made of Sam Zabel & the Magic Pen’s ongoing themes of wish fulfillment fantasies. Dylan explained that the book came into being through his own processing of comic-writing as living fantasy – and then in writing (and drawing) it out, ‘it lead to me finding my way back’.

The questions were appropriately deep and varied for a pair of occasionally twisted but always brilliant authors like Elizabeth and Dylan, with discussion including the idea of bearing a moral responsibility for creative sensibilities , and whether or not the artist or writer bears some sort of ethical responsibility to their art and characters. On the latter point, the two agreed on Elizabeth’s statement that ‘it doesn’t feel ethical – it’s empathy.’

Conversation wandered on to the effects on working for a franchise and the individual relationships that people have with these iconic characters. He spoke about his experience creating Batgirl in the early 2000s, and how his relationship with those characters is so very different from other people – describing the interesting phenomenon of people having these creative connections limited in some ways by the fact that these characters are private property.

He did provoke a chuckle from many in the audience when he described his own view of Batman as a ‘proto-fascist sociopath’ – before quickly pointing out that this is his view of Batman, and his experience of it. And like biblical stories and folk tales in yesteryear, these days, we form our connections with these public fiction characters who come with their own vast backstories.

In addition to the general discussion of the book and the writing process, Dylan thanked those involved in the process itself – with thanks to the VUP team as well as the Unity team (our pleasure), and other deeply invested individuals like Jonathan King, who acted as a colouring assistant in the 11th hour – and his wife Terry, better known to Dylan’s online fans as ‘Madame Orrocks’.

After the talk, Dylan took up his pack of coloured pencils and worked his way through the queue of excited fans, personalising each of their books with a drawing. An hour and a half later, the last patient folks had their books inscribed, with the extended time for each drawing meaning that people really had the opportunity to have a one-on-one talk with Dylan themselves. Conversations varied from old-friend catch-ups to advice on how best to tackle the graphic novel world as a fledgling artist – but regardless of the topic, everyone got a chance for their tête-à-tête.

‘The nice thing about having a book out, finally,’ Dylan mentioned at one point during the talk, ‘is that it is not just me having a conversation with myself.’ So it sounds as though the best way to do Dylan a favour is to get your hands on a copy of Sam Zabel & The Magic Pen and join in the conversation with him too.

Gotta love a man who comes prepared with pencils

a small segment of the queue for signing

SAM ZABEL AND THE MAGIC PEN IS AVAILABLE IN STORE

AND FROM OUR ONLINE SHOP HERE