Update: The Chimes by Anna Smaill 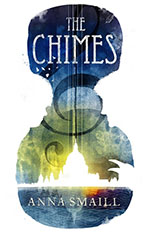 Born out of the emotions of leaving home behind and shaped by classical music inclinations, Anna Smaill’s debut novel The Chimes is a lyrical and lush read. Nearly ten years after the release of her poetry collection The Violinist in Spring, The Chimes had its Wellington launch celebration at Unity Books on the 26th of February 2015. Anna is currently based in London, so the event was particularly special with a phenomenal turnout for the lunchtime event. Friends, fans, family and colleagues turned up in droves to hear a little about the way in which The Chimes came into being.

Anna started out with a brief introduction to the book, speaking on the way she wove the ideas of memory into the story. She thanked all those who helped her through the process of writing The Chimes, paying particular tribute to her young daughter Lotta (who was very well behaved in the front row throughout the event) and husband, fellow writer Carl Shuker.
The reading from the novel provided a tasty little sample of the style that continues throughout the book – weaving together the plot are Italian musical terms, elevating the language onto a level that is very particular to the story that Anna has created. Once the reading had finished, it took the engrossed crowd a few moments to readjust and ask their questions – but once they did, Anna had tales aplenty to answer them with.

One question about the name Simon – an astute reader had noticed that the boy with lost memory in Keri Hulme’s The Bone People was called Simon, as is The Chimes’ protagonist – lead to an explanation on other connections that the name had. Anna herself said it probably came from one of her favourite childhood books, but noted that the Greek poet Simonides was also known for being the creator of the memory palace concept. The layers that can be unpacked through reading and discussion are quite a thing to behold.

Review and photography by Briar Lawry

The crowd at the lunchtime event

The Chimes by Anna Smaill

Anna Smaill talks to the crowd

and from our ONLINE SHOP HERE