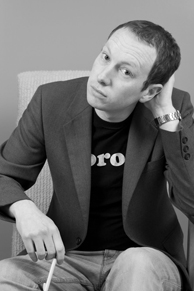 Craig Cliff’s A Man Melting won the 2011 Commonwealth Writers Prize for Best First Book prior to which it was on both The Listener‘s and Sunday Star Times Best Book Lists for 2010. Here Cliff talks about leaving the stage whilst pursued by a bear.

Which book caused you to love reading?
I always liked reading, but it wasn’t until I was about 14 that I started to lose myself in books and libraries. I devoured books about Norse mythology and Jungian psychology (I was a strange kid) and novels by Douglas Coupland and Don DeLillo – but the game-changer was when I read my first Kurt Vonnegut novel,  Slaughterhouse Five. It was totally different to other novels I’d read, but somehow totally familiar. Sad and funny: perfect for a depressed, geeky teenager. Since that time I’ve drip-fed myself Vonnegut, saving up his other books as rewards for The Brothers Karamazov or Jane Eyre.

What are you currently reading & how did you come across the book?
I normally read several books at once, depending on where I am and what I’m doing. The audiobook on my iPod (for the bus ride to and from work) is King Solomon’s Mines by H Rider Haggard. The book on my nightstand is That Deadman Dance by Kim Scott, who I got to hang out with in Sydney as part of the 2011 Commonwealth Writers’ Prize festivities. And today I re-read my copy of The Winter’s Tale from my uni days. It was sort of research for the novel I’m working on, but now I really want to work the famous stage direction ‘Exit pursued by bear’ into my text…

What is the book you have re-read the most?
Probably Moby Dick. It started as another uni textbook, so I read it twice in pretty close proximity in my late teens. When I was 21 I tried to write my first novel: a straight-ahead road-trip bromance bildungsroman in which I also tried to combine the myth of Maui with Moby Dick  (so that Maui became the mad Ahab character, pursuing the great white fish as an act of vengeance against its father, Tangaroa). I was in way over my head, but that accounts for a couple more read-throughs of Melville’s novel. Then last year I wrote a short story, My Yale and My Harvard (later published in The Listener) that describes the experience on an eight year old reading Moby Dick, so I re-read the novel again. Somewhere I must have also re-read it for pleasure because it remains one of my favourite books. It’s so rich. I can’t think of many other books that could stand up to another read after having my pilfering eye run over it multiple times.

Favourite book to movie adaptation?
Fight Club is better than Palahniuk’s novel. And The Graduate (based on the novel by Charles Webb) is one of my favourite movies. But, after seeing what Burton/Depp did to Roald Dahl’s Charlie and the Chocolate Factory, I’d have to say the 1971 adaptation (Willy Wonka and the Chocolate Factory) gets my top billing. The strength of Dahl’s children’s books is the way adults are presented as capricious, inscrutable and often malicious; Gene Wilder is all of that and more.

Who or what impresses you most?
A knowledge of Canadian rock music, the ability to recite entire poems, boat owners who know what they’re doing and can fix anything that might go wrong, people who know the names of trees and can distinguish birdsong, an unfailing commitment to a beleaguered sports team, a sense of humour – any of these things will impress me greatly and I’ll cling to you for the rest of the party.

Who are your favourite poets?
I mostly read New Zealand poetry, so my faves are Geoff Cochrane, Glen Colquhoun, Elizabeth Smither and Bill Manhire. Airini Beautrais is on her way up Mount Olympus to join the Pantheon…

What books are next to your bed?
Aside from Kim Scott’s book, I’ve got Green and Ricketts’ 99 Ways Into New Zealand Poetry, Helen Laurenson’s Going Up, Going Down: The Rise and Fall of the Department Store, Samuel Butler’s Erewhon  and a copy of Christina Stead’s The Man Who Loved Children that I picked up last year after Jonathan Franzen raved about it in the NY Times but have yet to start.

What’s your idea of happiness?
It’s 4pm on one of my writing days. I’ve added ten pages to my manuscript and am finished writing for the day. The cupboards are full of interesting food and I start cooking dinner for my fiancée and my flatmate.

“A lot of writing nowadays is very intellectual. Very wussy. Correct, wussy, and too much rationalization… I really want stories that are rippers in the old sense. Tales of high danger, high adventure, and high exploration. Tales that are as wonderful as frontier tales. I want more adventure.”

A Visit From the Goon Squad by Jennifer Egan
Ray McVinnie