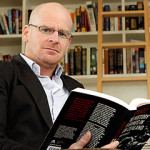 There’s something voyeuristically thrilling about knowing what other people’s reading habits are. The Reader is a brief interview inspired by the Proust Questionnaire which itself was inspired by a 19th century party game. We ask readers, writers, publishers and book-lovers everywhere (including our own staff) to answer eleven questions about the books they love, what they have been reading and their literary habits.

What are you currently reading and how did you discover the book?
I’m reading a book called Outlaws by Adam Shand at the moment. It’s a look at Australian outlaw motorcycle clubs. It was sent to me by a member of an Aussie club after he read my book. Apart from making the foolish error of trying to mimic the great Hunter S. Thompson in parts, it’s OK.

Who are your favourite writers and what do you love about them?
I have numerous favourite books but only one favourite author, John Steinbeck. Some I’ve read many, many times, but I’ve still yet to open East of Eden. Given Steinbeck appears to have stopped writing, as soon as I read that one it’s all over. I will be interested in the situation that gives rise to me deciding to read that book.

What books are on your bedside table?
Apart from Shand’s work you’ll find Freakonomics by Levitt and Dubner (I’m a bit late getting onto that) and Expert Witness by Anna Sandiford. I must give a quick shout-out to Khomeini’s Ghost by Con Coughlin, though, as that’s just gone from the bedside table to the shelf. It is a terrific book that opened my eyes to how little I knew about Middle Eastern politics (and it’s a surprisingly easy read).

What is your favourite book to film adaptation?
One Flew over the Cuckoo’s Nest. And I’m not saying that’s my opinion, I’m asserting it as an objective fact.

What books have you re-read the most and why?
To a God Unknown by John Steinbeck. I’ve just spent five minutes thinking of why I love that book and I don’t think I can articulate the reasons. Maybe to do so would be to ruin its magic. All I know is that I always lament finishing it. Every single time. Any book that can do that has done it’s job.

Who is your favourite literary character?
Dean Moriarty from Jack Kerouac’s On the Road. That book changed my life. I’m not sure if it changed it for the better, but it certainly changed it.

What books have you always been meaning to read but still haven’t got around to?
I have it in the back of my mind I should read War and Peace. But really, I can’t be bothered.

Which three writers would you have over for supper?
It goes without saying I’d invite Annabel Langbein. She took my alcohol-inspired speech at the New Zealand Post Book Awards so well, I figure I owe her one. She wouldn’t come, of course, probably because I’d ask her to cook
Christopher Hitchens would have been right there but he’s had a previous booking so I’d take Richard Dawkins instead. Finally, I’d invite Emily Perkins. I met her briefly recently and I think she might be interesting.

How are your books shelved and organised at home?
Since the Christchurch quakes they’re all stored in boxes. Also since the quakes I’ve been living in an office, which belongs to a mate of mine who is a church minister. One whole wall is a collection of book shelves (equipped with a very cool ladder on wheels) .
Given I’m an atheist I don’t find much to my liking (and despite numerous searches I haven’t found a spell to turn water into wine) but it looks pretty impressive.

What is your favourite literary quote?
“I can resist everything but temptation.” – Oscar Wilde (but I did have to Google that, so I cheated).

Jarrod Gilbert’s Patched: The History of Gangs in New Zealand is available to purchase HERE through our online shop.

Kiran Dass has been a bookseller at Unity Books (now in Auckland but previously in Wellington) since 2005. Kiran is an Auckland based writer and reviewer who has written about music, film and books for the NZ Listener, The Wire, Sunday Star-Times, Metro, Landfall, Real Groove, Rip it Up, NZ Musician, NZ Herald, Dominion Post, No, Pavement and Staple. She sometimes produces music features for Radio New Zealand and reviews books on RNZ's Nine to Noon show and reviews music books fortnightly for the 95bFM Breakfast slot Loose Reads.

View all articles by Kiran Dass