Interviews May 1, 2019 posted by Unity Wellington 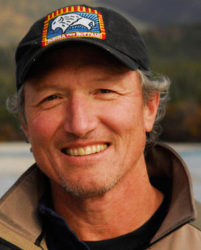 As New York Times writer Bronwen Dickey said, “Nick Jans is an exceptional storyteller — no nature writer can top him in terms of sheer emotional force — and he frames even the smallest moment with haunting power”. The force of Jans’ narrative is so strong that Romeo’s story will simultaneously bring you to tears from joy and sadness. Read our interview with Jans below and check out A Wolf Called Romeo in store, it’s exceptional.

What does a day in the life of Nick Jans look like?

That all depends—these days, more than ever. I travel between three houses: one in far northern Alaska, 350 miles off grid; another in the rain forest of Southeast Alaska, a thousand miles to the south; and the past three years, I spend mid-autumn through winter in an entirely un-Alaskan setting, along the upper Suwannee River in north Florida (I married a Floridian, after all). But in all three places, I seek out wild creatures and choose to surround myself by nature as much as possible. Unfortunately, a big part of being a writer and photographer entails sitting in front of a computer far more than I’d like. That much remains true, no matter where I am. But if there’s a bear, a hummingbird, a moose, or a manatee (in Florida) somewhere near, everything stops. Wild things and wild spaces have always been my first love. They pull at the metal of my being as if they were magnets. Being surrounded in wild spaces among wild creatures is my church.

Back to the question: my most exciting days are indeed adventure-filled as one might expect; but an average day is taken up by the boring-to-relate details and tasks of everyday life, no matter where I am. Everyone performs all manner of necessary tasks that are difficult to glamorize. Even in bush Alaska—as a matter of fact, especially in the bush—most of life is taken up by hauling water, cutting wood, and hauling loads around, and working on all manner of things that are hardly exciting.

How do you prepare yourself for a day of writing?

Let’s get one thing straight: I loathe sitting in front of a computer and staring into a screen for hours on end. Writing—at least, writing well—is a tedious and difficult business under the best of circumstances, and I’m always looking for excuses not to do it. If I have a project underway, I have my computer out and available (these days, usually a laptop) with the piece I’m working on up on the screen. I sit down, wrestle with a sentence, a paragraph, or even a phrase as long as I can bear it, then jump up and head outside to walk around with a cup of coffee or beer in hand—depending on time of day—and look at the trees, the birds, the sky and weather. Then I merge into puttering at any number of tasks involving tools (I’m always building something, or working with a chain saw, or repairing some piece of equipment.) Then I go back inside to see if the elves have written anything in my absence, and hammer away at my piece for as long as I can make myself stay still…and repeat as many times as necessary. I often stay up long past everyone else, and find I do my best writing late at night, with the television or music on at low volume in the background. I sometimes find myself very productive when writing in distinctly un-private places, like restaurants, waiting rooms, airplanes, et cetera. I write in my sleep—I’m a very lucid dreamer. I find turning off my brain impossible. I’m always writing in my head. In front of a computer, where the rubber meets the road, not so much. In short, I write as much as I can make myself, which is never as much as I should.

What’s your fondest memory of Romeo?

That’s an impossible question! There were so many moments, brilliantly etched. But the time when Sherrie, Dakotah, and I first met him together, the scene that begins the book, stands out. Also, the time when he, my Labrador retriever Gus, and I took a nap together out on the frozen lake on a sunny April afternoon. I think of the trust that wolf must have had to shut his eyes a few feet away from a species that was his biggest threat, and am overcome by gratitude and emotion.

What’s the most important lesson you learned about humanity / animals from your relationship with Romeo?

One must be open to the world, and to be still and present in the only moment we have, which is always the finger-snap of this instant. Not only witnessing Romeo’s life, but dealing with his death, has been the great lesson of my life, one too complex for me to explain. Love is its own country, beyond the boundaries of words.

If there’s one thing you hope your readers take away from A Wolf Called Romeo what is it?

I’ll answer that with a question of my own: can we be friends with wild creatures, even those we have been taught to fear? I think the book offers a definitive answer. We need to be still more often in nature, and allow the world to come to us. We’re all fellow travelers on this little rock, wheeling through the vastness of space and time; and we need each other.

If you were stranded in the Alaskan mountains with only one book (that’s not your own!) what book would you choose and why?

Have there been any repercussions for Romeo’s killers since A Wolf Called Romeo was published, after they seemingly got away with it?

Well, they always were in their own personal hells. I feel not anger for them, but pity. What sad, lonely, angry men. Within a year of killing Romeo, Jeff Peacock was diagnosed with cancer and died slowly of it; Park Myers has been in and out of prison for stealing to support his drug addictions and is separated and estranged from his family. That may offer others comfort, some sense of divine retribution, but I find little solace in their suffering. While I don’t forgive them, I don’t think of them much either. They really don’t matter. Meanwhile, Romeo lives on. He and his story trot out into the world, translated into seven languages besides English. In Juneau, Alaska, there are two streets named after this wolf, as well as a beer, a bar, and a coffee (in a town that values all three). Plus a bronze plaque and an exhibit that was visited by more than a half million visitors last year.

How are you working to keep the spirit of Romeo alive / what projects do you have in the pipeline for this year?

Besides raising the funds and being the project supervisor for that exhibit at the Mendenhall Glacier Visitor Center (now completed), I make presentations aboard cruise ships in Alaska waters, telling Romeo’s story to thousands of people from around the world. With the remaining funds, I hope to erect a kiosk down by the cruise ship docks in Juneau: a photo exhibit that welcomes people to Juneau, home of Romeo, the friendly black wolf.

As for ongoing projects, I’m working very slowly on a long-simmering literary novel set in far arctic Alaska, in a small Inupiaq village—a tragedy in the Shakespearian sense of the word, exploring the nature of justice and the boundaries of love. One of the main characters is an old Inupiaq man, the village pastor, whose name is Amos Amaroq…and amaroq means wolf.

Sharon Lam
AFTERGLOW: From Strategy to Action by Alicia McKay