Articles About Unity May 18, 2021 posted by Unity Wellington 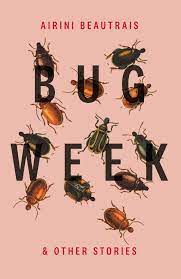 Former Unity Books staff member Kiran Dass was one of the judges for the 2021 Ockham New Zealand Book Awards. In this article from Newsroom, she discusses the decision to award the fiction prize to Airini Beautrais for her book of short stories, Bug Week (Victoria University Press).

And the winner is Airini Beautrais

If you’ve not yet read Bug Week by Whanganui-based writer Airini Beautrais, named tonight as winner of the $57,000 fiction prize at the Ockham New Zealand national book awards, stop mucking around. Buy it at once, and prepare to revel in its dark, velvety, macabre and sometimes crack-up thrills.

When we were in the nitty gritty stages of selecting a winner after the relative breeze of picking the longlist and shortlist, my excellent fellow judges (Dunedin’s Claire Finlayson and Hokianga’s Paul Little) and I kept diplomatically saying to each other, “any four of these books could be the winner”. We love all of the books on the shortlist and the longlist. The longlist would make a terrific reading list for the rest of your reading year. But of course there can be only one winner and we weren’t allowed to pull a shameful, scandalous stunt like the Booker Prize Atwood/Evaristo fiasco of 2019. Nor did we want to. We needed to pick our one winning title with backbone. And we deliberated right up until the last minute, scrutinising every last detail of our four books. Our international guest judge Tommy Orange who was a 2019 Pulitzer Prize finalist for his book There There had definitive, unwavering views about what he thought of the shortlisted titles, and he too was blown away by Bug Week.

I’ve admired Beautrais’ writing for a long time now, and have always kept an eye on whatever she writes whether it’s a collection of poetry or a searing essay online. The first time I came across her work was when I was working at Unity Books in Wellington. She’d published a collection of poems in 2006 called The Secret Heart that I liked. I don’t read much poetry but I liked this collection. It was fresh, contemporary and witty. It wasn’t dry, serious or stuffy. It has a great piece in there called “Mix Tapes” something about how once we made each other mix tapes and handed out pamphlets (probably some kind of anarchist propaganda) to each other, but now we hand out business cards and say things like, “well, see you ‘round.” That’s me paraphrasing from memory because my copy is packed away in a box somewhere.

The first event at Unity I was allowed to organise on my own was an evening poetry reading for National Poetry Day. Beautrais was the first poet I thought of inviting. It was a bitterly freezing cold night and I’m not sure if many people showed up to that event, actually. I got Jenny Bornholdt to read, too. Beautrais had a sombre, tawny coloured lipstick on and wore a prim vintage suit. I’m sure she was wearing high heels, which seemed very grown up to me even though we are around the same age. She read beautifully, with poise and a kind of quiet formality.

Then when I was later working at the Auckland chapter of Unity, every National Poetry Day it was customary for me to write a New Zealand poem on the shopfront window in my beautiful but probably unreadable handwriting. One year it was “The Library” by Beautrais. “Sometimes you feel sorry for these people,” goes a line in that poem. That’s the same atmosphere of Bug Week, too. A funny but deeply sad story about a swinger’s party, a comic but grim story about a woman compulsively jogging past the house of an ex and snooping on him and his new partner. We feel the red hot-faced shame when she is caught in the act. And somehow, inexplicably, Beautrais dazzles us enough so we suspend our disbelief when preposterously, a talking toroa shows up at an open mic night.

Apparently this collection was written over the course of 10 years. Beautrais has a sharp poet’s eye which lends itself to crafting exquisite short fiction. Not a word is out of place and crucially for a short story collection, it feels unified. Usually with collections I randomly dip in and out, but with Bug Week, I read all of the stories in order from start to finish. The first line of the book from the title story is, “At a certain age I began to think less about sex and more about tableware.” It immediately makes you lean in and say, “tell me more.” And from there the whole book just flows and feels unified as a whole. The stories range from the achingly sad, absurdly comic, grotesque and the weird and eerie. From multiple perspectives and voices, Beautrais needles right into the female experience with all its hopes, bitter disappointments and rage.

Domestic chaos, science, bodies, sex and death intersect in Bug Week. It feels like a collection that could only be written in New Zealand, and only by Beautrais. It’s a staunch, singular and defiant kick-in-the-nuts sort of a book, and we can’t wait for it to reach a wider audience.