At the Mountains of Madness by HP Lovecraft 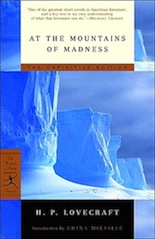 If you don’t know about Lovecraft’s genre of Cosmic Horror then here is an unfairly-short three-sentence synopsis. Having been witness to the atrocities and senselessness of World War One, atrocities committed in the name of ‘Reason’, Lovecraft began to write stories that attempted to convey the world as he saw it – a Pandora’s box of primal, unimaginable nightmares that humanity submissively and unknowingly quested towards in the name of ‘Progress’. The idea, developed through his Cthulus Mythos and Necronomicon stories is that ‘Reality’ was actually something alien to the human mind. Anti-Enlightenment and Anti-Romantic, his stories show protagonists – often scientists – who fleetingly view the ultimate horror that is the truth underpinning reality and who pay terrible prices for that understanding, often losing their lives or their sanity as a result.

This structure is repeated in many of his stories, and, along with Edgar Allan Poe, Lovecraft’s influence can be seen throughout the modern horror genre and beyond it. At the Mountains of Madness is a novella from late in his career and represents the maturation of the ideas and forms mentioned above. A group of scientists taking core samples in the Antarctic find strange fossil remains. The group splits up so that one of the senior scientists can pursue his hunch about bizarre archaeological ruins. His subsequent discovery of caverns and creatures beneath the ice lead to catastrophe and the second group who come to pick up the pieces discover the trail of a brutal and ancient culture that leads them high into the mountains.

Seem familiar? At the very least, it’s the plot of another literary gem Alien vs Predator. It was also adapted by Stephen King into The Thing. Any film you can think of that follows the scientists-dig-in-ice, monsters-come-out-of-ice formula is normally borrows something from this Lovecraft work written in the 1930s. (Though it’s worth mentioning that Lovecraft’s story is in turn heavily indebted to Poe’s The Narrative of Arthur Gordon Pym of Nantucket.)

As reviews go, the reviewer is usually obliged to give some critical opinion, and there’s this. You have to put some disbelief aside with this story, especially as regards the use of the Hollow Earth theory and the recurring question for me of ‘how well can a squid really climb a mountain?’

It’s horror and it’s fantasy. But it’s not senseless fantasy. Lovecraft was the godfather of the Weird and that development was also visceral and radical thing in it’s time. His stories can still give you shivers. At the Mountains of Madness is completely justified as being heralded as a Sci-Fi classic. For extra trivia points, its worth mentioning this story is also the longtime passion project of filmmaker Guilleromo del Toro, who spent a few years in New Zealand wondering about how it might be produced. Now working at a new studio, it could still be in cinemas soon.)

The story appears in Lovecraft’s Necronomicon but the edition shown above is from the Modern Library with an introduction by China Miéville, author of The City and the City and The Kraken. If it leaves you with a taste for further reading, then Mr Miéville’s also written an excellent essay available online on the history of the tentacle in literature entitled The Quantum Vampire, which explores At the Mountains of Madness further.

Served best with an ice-cold beer and deep-fried calamari.