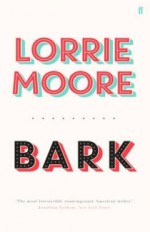 Reviewing anything by an author as established as Moore requires a little extra perspective, especially if you care about her body of work as a whole. Moore’s last collection of short stories was 1998′s Birds of America. She has been published through lit mags in the time since then but her most recent piece of work was 2009′s A Gate at the Stairs. So fans of Moore’s may be sitting around with a range of expectations, and people will love it and hate it, and not quite get it. I’m in the first group.

I worked a lot with short fiction in the last year. Wrote a lot, read a lot. I thought it might be a while before I felt like reading some more, but when I received an advanced proof of Bark that went out the window. The first sentences of eight stories are boasted on the back cover and could easily just be the darlings, but it isn’t the case: word-to-word her prose is as electric as ever. They challenge recent criticisms of the genre (the homogenized, this-is-what-a-short-story-must-be theories), but contain the detail necessary to still meet the idea of a snapshot. Over lunch I was told to stop quoting aloud several times.

The wit Moore weaves with leans further towards humour than bitterness, though I still read it as black humour and there is a tragedy to the comedy. It begins with a middle aged man navigating divorce, dating, an adolescent daughter, and 9/11. It progresses to parents visiting an institutionalised son with mania, a rocking singer/songwriter figuring out the motions between her partner and neighbour. Other favourite stories included a ‘What if’ dreams of recent suicides and an experienced literati couple stuck in a vapid social occasion, sandwiched between a sculptor and a lobbyist.

For a smallish collection it packs a lot in. I suppose this is one of her strengths – some of the stories feel like novellas, others are only a few pages long but last a lunch break. I found myself re-reading because I was afraid of missing something – there are no filler lines to get distracted by. For this reason, each story quickly builds momentum. Bark is firmly rooted in a post-9/11 world, but it avoids being too on-the-nose without ignoring the fact of its relevance.

The last book of Lorrie Moore’s I read was 2009’s A Gate at the Stairs. When I read shorts from writers whose novels I’ve enjoyed, I often think that they simply put more effort into observing the little things: they build the characters’ lives up in a novel, but choose to be sparse in the stories. That isn’t the case here. All of the detail in Bark reads as 100% necessary, things you must know about the POV character, no matter how insignificant it may seem. It is exactly the sort of writing I prefer; In a long passage about a characters relationship with their mother I tend to wonder if they’ve had anything to eat at the time. It makes me think of Moore as an existentialist writer because she shows how the slightest inference is relevant to whatever situation she describes. These stories are dense, they are laden with full lives, and they are beautiful.

What kills me is that it has taken me two and a half weeks to finish a 158 page book because I just didn’t want to get to the end and miss reading it.

Note: the image above is of the UK Trade edition. It will be available from Unity Books in March 2014.