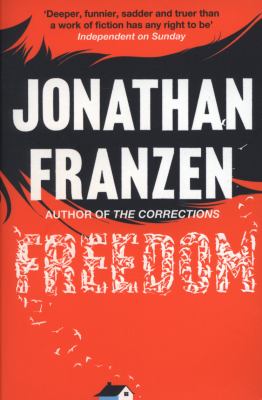 Jonathan Franzen’s new novel Freedom may present problems for those that suffer from literary anxiety. The Corrections, his previous novel, was hailed as the first great novel of the 20th Century. A novel so socially and politically astute, is not an easily repeatable trick – how does one follow that? The fear of eroding the memory of such a book by reading the author’s next novel looms large.

Critical voices have been raised concerning the paucity of social novels coming out of the US, or, indeed, western literature. There is a feeling that the endless products of Creative Writing Masters programs amount to a conglomeration of fine, highly competent homogeneity. Literary critics have asked where the angry writers are, where are the writers who challenge the constraints of our comforts and understanding? Where are the writers that roar?

Freedom is an excellent answer.

Franzen’s playground is middleclass America, the ideal nuclear family at the core of America’s imagining of itself. As a reality it’s a lie the country tells itself to support politics of entitlement and mass consumerism. But the lie is the idealism of the nuclear family, not the existence of it. The characters of Freedom, as the microcosm of the middleclass, bring the macrocosm of society into focus, questioning the idea of the American family and the society it purports to represent.

Liberty and freedom are concepts close to the heart of America, vital to the conviction and philosophy of the US spirit. Yet to those outside its borders it is an idea laced with years of propaganda and dismaying irony. Franzen’s focus is the living reality of freedom, the embodiment of its philosophy in the lives of his characters. He looks to his characters, flawed and passionate, to enact and question their freedoms – not their imagined freedom, but their imaginings of freedom.

With moral intelligence and surprisingly ribald wit Freedom asks us what liberty is. Is it deterministic or libertarian? Is freedom, as Robert Frost said, being ‘easy in your harness’? Does our social class or conscience decide our liberty? Or is it defined by our fucked up families and the lessons they teach us? Without sermonizing or resorting to brazen commentary, Franzen allows his characters to be these limited and contradictory freedoms, playing out for the reader the consequences of liberty, its realities and illusions.

Franzen’s characterizations breathe detail and reality into his protagonists: Richard, a sardonic rock-god, self-indulgently railing against societal norms. Walter Berglund, the very personification of meliorism, confounded by his high ideals, is crippled by his inability to express neither the love nor anger that fill him. And Walter’s wife, Patty, a self-loathing, ex-athlete who doubts the validity and merit of her life; the Autobiographer, able to see the harm she does yet is incapable of stemming the love that drives the damage she metes out. If the other characters are the currents of the novel, Patty is the body of water they run through. Patty expresses the constraints and expressions of freedom; all its complexity, damnation and beauty. Patty, and the extended Berglund family, is testament to the moments of perfect horror and beauty that make a life; moments emblazoned on personalities so deeply they can be passed through generations and societies like DNA.

So, where have all the social novels gone? Who is it that’s roaring? Freedom is a great social novel – it is brilliant. But Franzen doesn’t roar – he places his hand gently on your left shoulder while whispering, calmly and kindly, in your left ear. Until all you can see is the reality he describes.

This novel is life bound in paper sheaths; an idea explored in a narrative of warmth and great intelligence, carried forward by characters of depth and profound flaw. It is an all-consuming narrative about how to live – as a friend of mine said, ‘I could live and breed in that book, fucking roll around in his words and never get up or shower or go to work again.’

BUY Freedom IN OUR ONLINE SHOP