Just My Type: A Book About Fonts by Simon Garfield 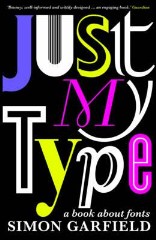 An engaging Bill Bryson-esque history on everything from the Guardian’s April Fool’s day hoax on the islands of Sans Serif to Obama’s Gotham election glory. This book had me captured from beginning to end and resulted in my seeing the world in a totally different, unique and fontastically (sic) new way.

A review by Peter Robins:

“A generation ago the language of typography remained a sort of guild secret. Unless you worked in printing, design or parts of publishing, talk of fonts and point sizes was likely to be Greek to you – though Greek, in this context, can refer to meaningless dummy text or grey blocks in place of it.

Now, after 20 years of graphically capable computers, every child and every office worker knows what a font is. Those writing on the subject, however, are still prone to come across like medieval craftsmen ticking off an apprentice. For a start, they explain, you don’t know what a font is. A font is one specific set of metal parts – or, these days, of digital files; the design that it allows you to reproduce is called a typeface.

Simon Garfield does not treat his readers like that. In the second chapter of Just My Type – the chapter that explains common typographical terms, after the first one has hooked you with anecdotes about the much-denounced font Comic Sans – he goes briefly into the font/typeface distinction. He concludes: “In common parlance we use font and typeface interchangeably, and there are worse sins.” He does not write as a master addressing apprentices; his is the voice of an amateur font enthusiast hoping he can convince others to share his enthusiasm.”

Summer 2010 – Newsletter #40
Their Faces Are Shining by Tim Wilson