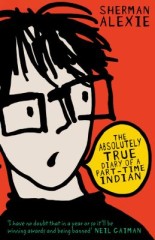 Sherman Alexie is an awesome and talented human being. He is a poet, film-maker and novelist for adults and young people who has won both the National Book Award and the PEN/Faulkner prize for his writing. He is also really good at basketball.

In my opinion, this book is one of his best. The Absolutely True Diary of a Part Time Indian is hilarious, sad and critical. It follows Alexie’s alter ego, Arnold Spirit, as he navigates his own path among the conflicting demands of his community, family and culture, as well as the wider world that surrounds them. It is a story about bullying, hydrocephalus, kisses, alcoholism, basketball and life in its widest, most confusingly beautiful and exciting sense.

The Absolutely True Diary of a Part Time Indian shines a light onto Alexie’s own childhood in the Spokane Indian Reservation and looks outward to the wider issues of racism, disability and drug abuse which have shaped the lives of his family and community. The book’s greatest strength is its directness and honesty; by talking straight about issues of friendship, young love, colonial dispossession and hopelessness, as they genuinely affect young people, Alexie avoids the thin editorialising that overcomes many writers when they try to communicate the complexity of our world.
The Absolutely True Diary of a Part Time Indian is hilarious, sad and wise beyond belief. This is a book for young people of any age who are interested in what means to decide what and who you are.

The Perks of Being a Wallflower by Stephen Chbosky
UPDATE: Sarah Vaughan is Not My Mother by MaryJane Thomson launch CANCELLED

View all articles by Dan Hills