Their Faces Are Shining by Tim Wilson 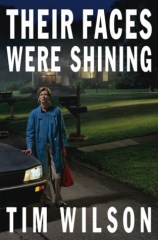 When Hope Paterson plunges into a construction hole at her local mall and saves a child from drowning, she believes this is a sign from God. Maybe her marriage, her relationship with her daughter – even her diet – will be revitalized. Days later, a car crashes outside Hope’s office. The young passenger is dead but the driver has mysteriously disappeared, leaving just her clothes. Then her daughter calls unexpectedly. She is weeping. Kids floated up through the roof in calculus class, their faces glowing with unearthly light. She sobs: “Mom, it’s the Rapture.”
“The Rapture?” thinks Hope, “on a Monday?”

The world ends; the world carries on. The Dalai Lama is seen floating above a duplex on Fifth Avenue, laughing uproariously. Angry mobs torch churches. Flagellants whip themselves, hoping to earn God’s grace. The hot new reality show is called “Are YOU the Anti-Christ?” The Dow surges. As anarchy descends, Hope must fight for those she has loved so poorly, and then for herself.

Their Faces Were Shining combines profound human insight with a thriller’s narrative drive. Engaging marriage, family and faith, mixing comedy and awe, it is an astonishing literary achievement. Gilead meets Left Behind -Anon.

Tim Wilson is TVNZ’s US Correspondent. He has written for numerous New Zealand publications as well as the Guardian and Newsweek.com. His short fiction has appeared in Sport, Metro, the Listener and Open City (New York). This is his first book.

BUY Their Faces Were Shining NOW IN OUR ONLINE STORE!

Just My Type: A Book About Fonts by Simon Garfield
Crossers by Philip Caputo