We Will Work With You: Wellington Media Collective 1978-1998 by Mark Derby, Jenny Rouse, and Ian Wedde 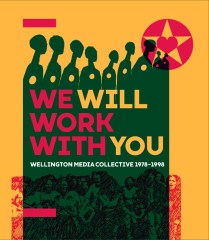 This beautiful book is an important record of New Zealand’s recent social and artistic history. The Wellington Media Collective was established in 1978 to support community organisations in taking advantage of printing and design technology. The book’s title refers to one of their central beliefs; that they could help most by teaching and helping, spreading expertise and inspiration ever in ever-wider circles.

The posters produced by the Wellington Media Collective over its twenty year history have illustrated the evolving struggles of New Zealand’s Tino Rangatiratanga, labour rights, queer liberation and feminist movements, alongside the growth of local theatre, music and visual art communities. The breadth of work covered by this book, and its companion exhibition at the Adam Art Gallery, is both impressive and inspiring, a record of high hopes and continuing struggle transformed into striking and influential design.

The book’s coverage is both instructive and startling. Posters advocating beneficiary rights, during Ruth Richardson’s horrific tenure, sit alongside advertisements for the Goethe Institute’s 1997 festival of Herzog films. The result is a cross section through New Zealand history as lived by real people, a memorial to the struggles which successive generations have fought to protect the best of New Zealand and its cultural life.

In an era where the worst excesses of the 1980s and early 1990s are being repeated, We Will Work With You bears witness to the courage, creativity and intelligence of ordinary New Zealanders, reminding us that we are often at our best when things seem at their worst.

View all articles by Dan Hills