Zone of the Marvelous by Martin Edmond 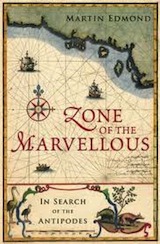 ‘He’s constantly demonstrating that the natural world is as splendiferous as any fable.’ – Jim Shepard, New York Times.

The antipodes existed in the imagination of Europe far before it ever became a tangible reality. Whether simply as a mineral resource to be plundered or as a ‘soon-to-be-settled paradise’ used to pacify civil rebellion in feudal European states, the Great Downunder was often a stand-in for the exotic ‘other’ in the mind of travellers and politicians across many parts of the globe.

Martin Edmond’s essay writing explores every evocative facet of this reality, from Gilgamesh seeking immortality on the other side of the Waters of Death, to Ptolemy, inventing a Great South Land to balance the weight of northern-hemisphere continents. He traces inventions underlying truth in the tales of Marco Polo and the equivocal John Mandeville, and the facts underlying fiction in Thomas More’s Utopia.

‘Along the way he wonders if Tasman’s dour puritanical character is somehow mirrored in aspects of the New Zealand psyche – and if the Australasian character might resemble that of the ‘old pyrating dog’ and three-times circumnavigator William Dampier, a compelling insouciant larrikin and freedom-monger.’

‘From Plato’s Atlantis to Dante’s Mount Purgatory, Sinbad the Sailor to Abel Tasman, travellers, writers, map-makers, charlatans and rogues dreamed of other worlds at the back of the sun.’ – AUP

Fascinating for New Zealanders with an interest in their anthropological origins, and for intrepid armchair-travellers alike.