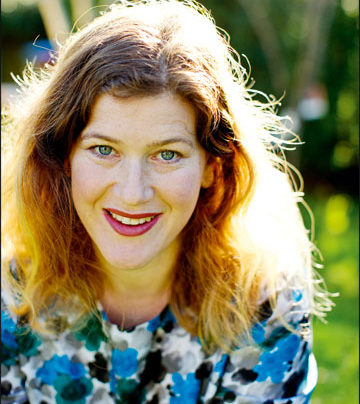 Let Me Be Frank is a witty tale of life’s ups and downs narrated and illustrated through the lens of one of New Zealand’s greatest cartoonists. Sarah Laing’s autobiographical comic series spans a decade of sex talk, family history, pets, marriage, and parenting failures. As Laing explains in her Spinoff essay, “the book became talismanic – not just a retrospective, but a portrait of a marriage come undone. I felt ambivalent and sad and also happy about all of the life that I had pinned down, butterflies in a cabinet”. Laing is the author of five other works, including her well-known graphic memoir Mansfield & Me.

What does a day in the life of Sarah Laing look like?

I am working four days a week as a graphic designer, so my one day off is loaded with expectation – do I do housework and washing? Or do I let the chaos mount and get back to work on my comics and writing? Today I am going to draft my regular comic about women doctors for the Association of Salaried Medical Specialists, and I also have a comic brewing about my recent Tinder experiences. It’s a sunny day so I also have the washing machine going and I’m hoping to get out into the garden… I still haven’t done my Spring planting!

Was there anything too frank to go in Let Me Be Frank?

There are things that I don’t necessarily write about that are painful to me, perhaps because I think they are too private or perhaps because they require some perspective and rumination. I am interested to see how far I’ll go with the Tinder comics… they may be too frank, although I have Gabrielle Bell as my inspiration and she’s recently written a hilarious and heart-breaking account of her foray into dating in New York City.

Your children are featured a lot. Have they read the book and if so what did they think?

I did show my eldest son the manuscript before I published it and he only vetoed one comic! My two younger children have flicked through the book and they like finding comics about themselves!

Your mum was a family planning sex education officer (among many other things) and you’ve given a frank account of the kind of sex talk you received from her. How do you think you’ll tackle it with your children?

Was there a scene you thought twice about putting in the book but decided to keep it in?

There are lots of scenes which I slightly cringe over but the trick of autobio comics is coming right up to the edge of what you’re comfortable sharing. The nearer you are, the more likely it is going to be true and real and resonate with the reader. I am familiar with the sensation of feeling deeply embarrassed. I did send some of the new comics to the people I had written about – my mother, for instance – to see if they were comfortable with my publishing them. My mother gave me her blessing!

You’ve touched on how insecure your friends felt about having their stories transformed into comic strips. To what extent have your relationships with family and friends changed because of your books and openness?

It made people feel a little self-conscious for a while when I was regularly posting comics. Some people desperately wanted to be in them! I feel like I have made connections with people I otherwise might not have known because of my openness. Also, I have that awkward imbalance in which people imagine they know a lot more about me than I know about them.

Have you found it cathartic being so honest in your writing?

In a way, writing comics has been my DIY therapy. I would often write when I was feeling lonely or underappreciated or weirdly jealous and it would remove those difficult feelings from me and make them seem humorous. I find now that sometimes I have trouble getting people to take me seriously – when I tell them about something major going down in my life, rather than empathising, they say “that would make a great comic”. Which is often true. But also annoying.

You celebrated your ‘modest advance’ by buying a pair of jeans and a nice top. What else did you do to celebrate?

Um, I don’t know… I am not very good at celebrating my successes! I do love to buy clothes to mark some kind of major event. I love clothes – they are my weakness. I often wonder how I could write about them. Book launches are always good!

What’s next for Sarah Laing in the world of writing?

I was going to write a contemporary novel, and I still would really love to, especially since I am part of an ace writing group that includes stars such as Emily Perkins and Elizabeth Knox as its members. But right now I’ve had an intriguing invitation to submit comics for an international publication, so I am going to do that. I could still start that novel… 300 words a day… how hard would that be? I just need to wean myself off social media…