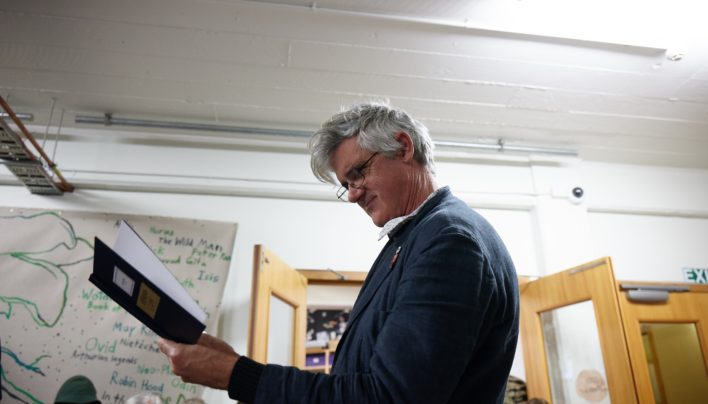 We are excited to soon be hosting the double launch for Lost and Somewhere Else by Jenny Bornholdt (VUP) and Always Song in the Water by Gregory O’Brien (AUP), 6-7:30pm Thursday 19th September. All welcome.

Read on to find out about some of Greg’s favourite books and authors, including new books by Rebecca Priestley and Anne Kennedy, both of which will be launched at Unity.

ABOUT ALWAYS SONG IN THE WATER

Beginning in Northland and heading into the blue beyond, Always Song in the Water is a book of encounters and epiphanies, a dinghy ride through New Zealand’s oceanic imagination.

Every spring on Gregory O’Brien’s front lawn, on a ridgetop in Hataitai, an upside-down dinghy blooms with flowering clematis. In this book, O’Brien takes his metaphorical dinghy to the edges of New Zealand – starting with a road trip through Northland and then voyaging out into the Pacific, to lead us into some under-explored territories of the South Pacific imagination.

With creative spirits such as Janet Frame, Ralph Hotere, Robin White, John Pule and Epeli Hau‘ofa as touchstones, O’Brien suggests how we New Zealanders might be re-imagining ourselves as an oceanic people on a small island in a big piece of water.

Always Song in the Water is a book of encounters, sightings and unexpected epiphanies. It is a high-spirited, personal and inventive account of being alive at the outer extremities of Aotearoa New Zealand. ‘This is my field notebook, my voyaging logbook,’ Gregory O’Brien writes, ‘this is my Schubert played on a barrel organ, my whale survey, my songbook.’

Among the many artists whose work is featured are John Pule, Robin White, Phil Dadson, Fiona Hall, Euan Macleod, Laurence Aberhart and the Sydney-based painter Noel McKenna, who produced numerous works specifically for this book.

‘Always Song in the Water is like a splendid tapa cloth left out to dry on the salt of Oceania. It admits all-comers into its wet and capacious tapestry – shoes, seabirds, icebergs, painters, whales, stranded pianos, poets, horses, ghostly containers, dinghies, oil spills, surfboards, reef knots and travelling saints – and so lays claim to a hospitality as vast and ancient as Oceania.’

Born in Matamata in 1961, Gregory O’Brien is a poet, artist and writer of non-fiction. As well as exhibiting his work widely and illustrating numerous books, he has authored or contributed to books on Ralph Hotere, John Pule and architect John Scott, amongst many others. He also co-authored Parihaka: The art of Passive Resistance (VUP, 2000) and Kermadec: Nine Artists Explore the South Pacific (Pew, 2011). O’Brien is the author of two introductions to art for the young and curious: Welcome to the South Seas (AUP, 2004) and Back and Beyond (AUP, 2008), which both won the Non-fiction Prize at the New Zealand Post Book Awards for Children and Young Adults. His most recent books include A Micronaut in the Wide World: The Imaginative Life and Times of Graham Percy (AUP, 2011), Beauties of the Octagonal Pool (AUP, 2012), Whale Years (AUP, 2015) and See What I Can See: New Zealand Photography for the Young and Curious (AUP, 2015). He has received many awards for his books and, in 2013, was given the Prime Minister’s Award for Literary Achievement (Non-fiction) and an Arts Foundation of New Zealand Laureate Award. He was granted an MNZM award in 2014 and, in 2017, an Honorary Doctorate from Victoria University of Wellington.

Because words keep winding me up… Language is the bridge between the self and the world… Writing is as fundamental as being awake and responsive… Sometimes I write because I am not painting.

I keep journals. These I take with me everywhere. So the short answer is I write everywhere all of the time, and with a pen on paper, by preference.

Fifteen Million Years in Antarctica by Rebecca Priestley. I wish I could say I came upon this book in a snow-drift on the frostier side of the Transantarctic Mountains; in fact I was handed a pre-release copy in an Hataitai bar on a relatively mild evening. I have also had the good fortune of running into Karl Wolfskehl, A Poet in Exile by Friedrich Voit. (Wolfskehl’s Three Worlds/Selected Poems, was published three years earlier by the same indefatigable and remarkable Cold Hub Press, of Christchurch).

The writers who have most haunted and inspired me in recent years: Wilson Harris, John Berger, Tove Jansson, Flann O’Brien, Pablo Neruda and Yves Bonnefoy. A good many favourite writers much closer to home crop up in Always Song in the Water, so I won’t list them here….

Elizabeth Strout’s Olive Kitteridge (with the recent mini-series adaptation of Catch-22 a close second) – both of them masterpieces, twice over.

Wilson Harris’s Palace of the Peacock. A burning tropical sun shatters into a constellation of stars which then turn into the eyes of the peacock’s tail. And therein lies the dramatic conclusion of this endlessly bewildering, alluring novel.

A toss-up between the narrator in Flann O’Brien’s The Poor Mouth and Little My in Tove Jansson’s Moomintroll books.

Thomas Mann’s The Magic Mountain keeps receding into the distance the closer I get to reading it.

Something from the Noma cookbook involving ash from incinerated trees, deer antlers, picturesque fungi and gold-encrusted insect-life, with a low cinnamon-scented cloud hovering just above the dining table. The tablecloth would be a painting by John Reynolds and the films of Florian Habicht would be projected onto the crystal wine-glasses, allowing the guests to experience a ghostly translucence as well as, in the course of an evening, a tidal ebb and flow. The napkins would feature pages from the books of authors mentioned earlier in this questionnaire.

New Zealand poetry is alphabetic; the rest is all over the show. Many of our favourite books are in the spare bedroom, at bed-height, in the hope/belief they will hold some considerable sway over the dreams of our visitors.

Apropos of the book I’ve just completed, Always Song in the Water: ‘My soul, your voyages have been your native land!’ (Nikos Kazantzakis)