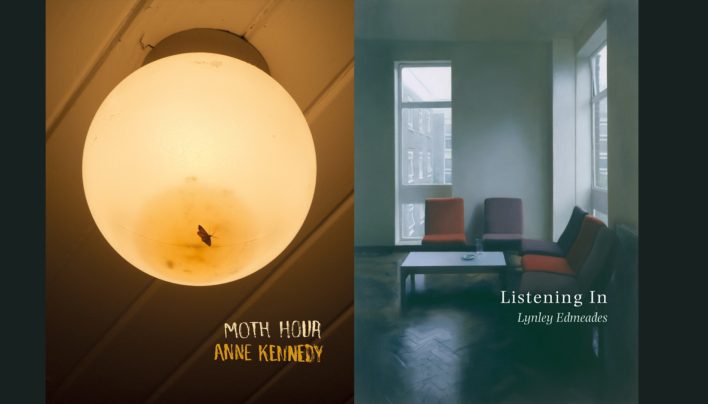 warmly invite you to celebrate the launch of ‘The family didn’t know what to do about grief. The noisy house went silent. I was fourteen. I lay on the red rug in the sitting room and listened to Beethoven’s Thirty-Three Variations on a Waltz by Anton Diabelli, op. 120 – over and over because it was there’.

In 1973, Anne Kennedy’s brother Philip was partying on a hillside when he accidentally fell to his death. Among books and records, Philip left a poem typed in Courier on thick, cream, letter-sized paper.

In Moth Hour, Anne Kennedy returns to the death of her brother and the world he inhabited, writing ‘Thirty-Three Transformations on a Theme of Philip’ and concluding with a longer poem, ‘The Thé’.

Kennedy’s extraordinary poems grapple with the rebellious world of her brother and his friends in the 1970s; with grief and loss; with the arch of time. The poems reach into the threads of the past to build patterns, grasped for a moment and then unravelling in one’s hands.

Moth Hour is a complex, ambitious piece of writing and a moving poetic engagement with tragedy.

‘This is subtle, moving and ingenious writing, occupying the mind in patterns that form, dissolve and reform – like the shapes of grief itself.’ – Tom Bishop

‘Moth Hour is an extraordinary work by one of our most original and gifted writers. Starting as a simple act of mourning and remembering, unfolding through multiple forms and voices, musical or vernacular, it swells into a moving celebration of art and the imagination. You will want to read it again and again.’ – Elizabeth Caffin

Anne Kennedy is a writer of fiction, screenplays and poetry. Sing-Song won Poetry Book of the Year at the 2004 Montana New Zealand Book Awards, The Time of the Giants was shortlisted for the same award in 2006, and The Darling North won the 2013 NZ Post Book Award for Poetry. Her novels include The Last Days of the National Costume, shortlisted for the NZ Post Book Award for Fiction in 2014, and The Ice Shelf, longlisted in the 2019 Ockham NZ Book Awards. She lives in Auckland.

In this original second collection, Lynley Edmeades turns her attention to ideas of sound, listening and speech. Listening In is full of the verbal play and linguistic experimentation that characterised her first collection, but it also shows the poet pushing the form into new territories. Her poems show, often sardonically, how language can be undermined: linguistic registers are rife with uncertainties, ambiguities and accidental comedy. She shuffles and reshuffles statements and texts, and assumes multiple perspectives with the skill of a ventriloquist. These poems probe political rhetoric and linguistic slippages with a sceptical eye, and highlight the role of listening – or the errors of listening – in everyday communication.

‘Edmeades’ poems are terrifically accomplished – they show confidence and a sure, skilful handling of language, even when expressing tentative, slippery ideas and emotions. Her work is full of verbal play, celebration, pleasure and despair. This is a book where you know the poet is intensely alive to language and its possibilities – she’s always looking for another angle, another way. Edmeades’ voice is an essential one in the ‘now’ of NZ poetry.’ – Jenny Bornholdt

‘This book confirms Edmeades as both a wily and witty writer with a sure grasp of the potential for shifts of linguistic register to create telling shifts of perspective. Extracting poetry from noise with cool measured techniques, Edmeades emerges in this collection as a precise observer of the human comedy as well as a careful listener. Edmeades’ poems are alert to the phenomena of the real world, delivered with a fidelity and assurance that indicate a significant writer. Every poem in this collection is rewarding.’ – David Eggleton

Lynley Edmeades is a poet, essayist and scholar. Her first book of poetry, As the Verb Tenses(Otago University Press, 2016), was longlisted for the Ockham New Zealand Book Award for Poetry, and a finalist in the UNESCO Bridges of Struga Best First Book of Poetry. She has a PhD in avant-garde poetics, and lives in Dunedin with her partner.