‘On First Looking Into Chapman’s Homer’ by Michael Parekowhai 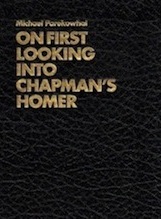 To say that Michael Parekowhai’s artwork explores what it means to be a New Zealander is an exercise in reductionism. His touch – playful, deep, curious and personal – reveals a variety of aspects of the kiwi psyche that seldom see the light of day. This publication is centred around the seriously impressive work of the artist that made its way to the Venice Biennale. But what, for me at least, makes it a great addition to the bookshelf is the insight it gives into the making of the work and the seriously real and credible talent of Mr Parekowhai – a creative force of nature. He juggles the heavy as deftly as the light. I don’t think I could wish to be more complimentary here, except perhaps to quote the poem this book takes its title from, in it’s copyright-free entirety:

‘Much have I travell’d in the realms of gold,
And many goodly states and kingdoms seen;
Round many western islands have I been
Which bards in fealty to Apollo hold.
Oft of one wide expanse had I been told
That deep-brow’d Homer ruled as his demesne;
Yet did I never breathe its pure serene
Till I heard Chapman speak out loud and bold:
Then felt I like some watcher of the skies
When a new planet swims into his ken;
Or like stout Cortez when with eagle eyes
He star’d at the Pacific—and all his men
Look’d at each other with a wild surmise—
Silent, upon a peak in Darien.’
– ‘On First Looking into Chapman’s Homer’ by John Keats.
– Toby Buck